Bernie Tormé: the guitar virtuoso who saved Ozzy Osbourne's bacon. Ronald McIntosh: a man of steel and charm, of whom Denis Healey remarked: 'The trouble with Ronnie is that he thinks he's Jesus Christ'. Roger Moate: 'intensely loyal to Faversham'. 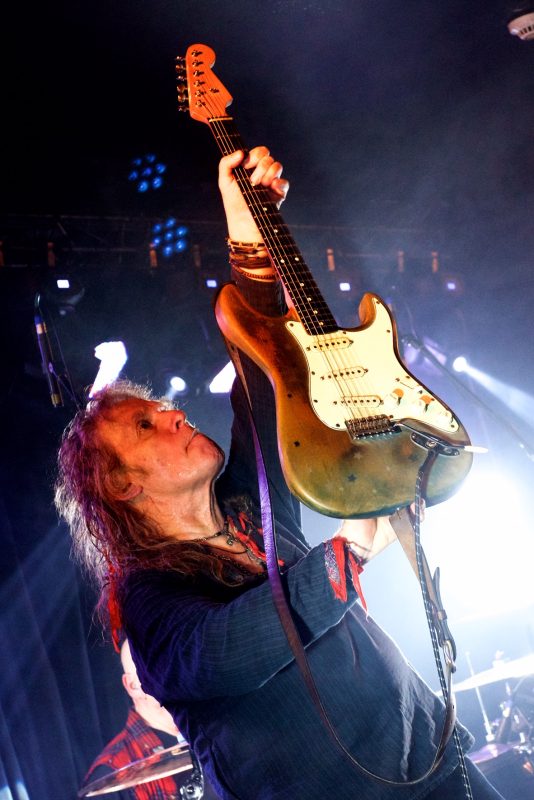 Bernie Tormé, the acclaimed and famously talented guitarist, has died at the age of 66, following complications with pneumonia. There have been tributes from Ozzy and Sharon Osbourne, Dee Snider, Ian Gillan and many others in the music business as well as from friends around Doddington where he lived.

Bernie was born Bernard Tormey in 1952 and grew up in Ranelagh, Dublin where his father Brian ran auction rooms on Ormond Quay. He was educated at Gonzaga College where, despite a rebellious streak (there were frequent long hair issues), he was a studious pupil. He became the youngest member of the Irish Astronomical Society aged eight, and had a lifelong fascination with the stars. Bernie went on to University College Dublin to study Ancient Greek. His passion for the guitar began in his teens and schoolfriends remember him playing for hours in his bedroom, listening to Jeff Beck, Rory Gallagher, Eric Clapton and Jimi Hendrix, and refining his art.

With an honours degree in his back pocket and a guitar on his arm, Bernie left the Dublin music scene, where he had fronted bands such as Wormwood and Sauroktonos, and arrived in 1974 to a London decked out in safety pins, dustbin bags and fishnets. He formed The Bernie Tormé Band and toured with The Boomtown Rats and Generation X, before joining Gillan in 1979 and playing on such best-selling records as Mr Universe and Glory Rd.

In 1982, Bernie hit the headlines when Ozzy Osbourne’s guitarist Randy Rhoads was killed in a plane crash, yet another catastrophe on a US tour which had already seen Osbourne collapsing on stage and apparently biting the head off a bat to the disgust of clean-living Americans. At short notice, Bernie was summoned to Leesburg in Florida to play guitar and was credited with saving the tour. Ozzy Osbourne described Bernie as ‘a gentle soul with a heart of gold’. Sharon Osbourne said: ‘I cannot believe that Bernie Tormé has passed. Bernie helped out Ozzy and I at a time of great need and we will never ever forget that.’ Bernie, however, found the experience horribly stressful.

Bernie ran a recording studio in Doddington where he lived with his family, cats and Ronnie, the border terrier. Bernie loved cats but found relationships with dogs more difficult because of their inately hierarchical natures which confounded Bernie’s egalitarian principles. Nonetheless, he grew to love Ronnie. In later years, he continued touring in Europe and Japan and released records such as Flowers & Dirt, Blackheart, Dublin Cowboy, and most recently, Shadowland. His children Jimi, Eric and Tuli have followed in his footsteps with their Margate-based band Gang. Bernie was a constant support and fan, often playing roadie and sound technician. He also supported young Faversham bands making his studio available to them.

He was quiet and thoughtful in personal life and had a stammer but he lost it on stage where he radiated warmth and excitement. Faversham Life saw him at one of his last gigs at The New Day Festival last year. He engaged the audience with chat, charm and chanting, thrilling them with his virtuosity on the guitar, playing his Stratocaster above his head against the thumping, meaty sound of songs such as You Can’t Beat Rock and Roll. His last UK tour in 2018 was called The Final Fling and ironically, it was. 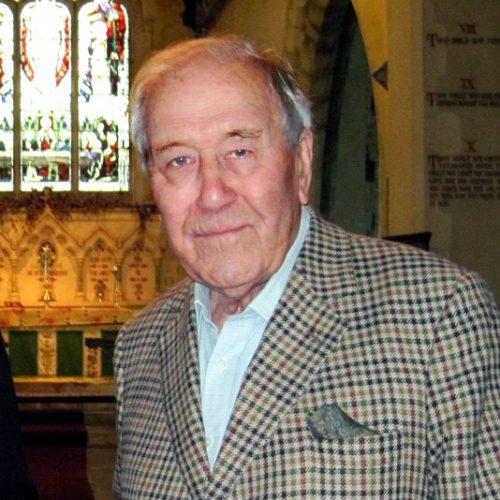 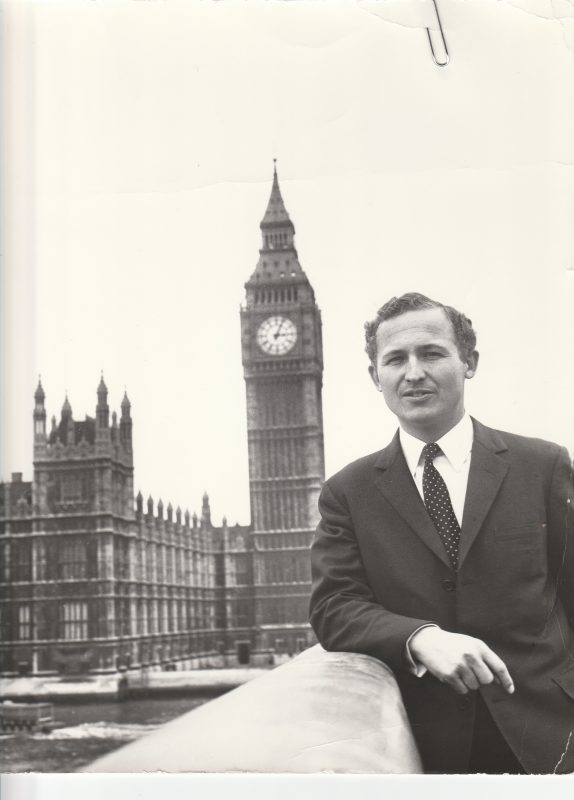 Two men who enjoyed and contributed to Faversham life – both of them subscribers to Faversham Life – have died: Sir Ronald McIntosh and Sir Roger Moate. Neighbourly friends, they had more than their knighthoods and Faversham in common. Each had a career in the political arena though their politics were far apart, and in each case the political career ended prematurely. Each did much to conserve his local church – Throwley for Ronnie McIntosh, Newnham for Roger Moate – and also a church in Faversham. Ronnie was raising money for the restoration of Mount Carmel Catholic Church in the months before his death and Roger had been a leading light in fundraising and restoration at St Mary’s. Each was keenly musical.

Both, after a strenuous career, seemed mellower and mellower in retirement, when their many friendships flourished. Both of them were modest men who loved living in their respective villages and had many devoted local friends.

Their full obituaries have been in the national and local press.

Ronnie McIntosh met Roy Jenkins on his first day at Balliol College, Oxford, and Ted Heath soon after.  He regarded Roy Jenkins, who asked him to be his best man, as his closest friend, and was close to him always politically, though technically neutral as a civil servant.  He was a fervent European.  The high point of his career was his appointment by Harold Wilson as director of the National Economic Development Office during the 1970s until its abolition by Nigel Lawson. Neddy (as it was called) had such a short life that its importance is now forgotten. It was at the centre of government because it brought together the government, employers and the unions at a time when the most powerful of these was the last. Ronnie McIntosh was the arch conciliator, with steel and charm. These qualities led Denis Healey to remark: ‘The trouble with Ronnie is that he thinks he’s Jesus Christ.’ The title of Ronnie’s memoirs, Turbulent Times, was apt.

He then embarked on a business career, which included a directorship of the merchant bank SG Warburg and chairmanship of APV.

He married Doreen McGinnity in 1951. They were sad to have had no children but their devotion to each other was evident. In the last few years before her death in 2009 Doreen was wheelchair-bound and Ronnie looked after her with complete dedication and love.

After her death, Ronnie, who had watched his father in late years ‘going internal’ by keeping to himself and reading books, expanded. Generous and genial, gentle and relaxed, he had a busy social life, much of it self-generated. He started the Friends of Throwley Church by knocking on doors himself, and chaired it for the next ten years. He became an advertisement for active nonagenarianism. He accompanied his niece on a long-heralded expedition to St Kilda, coming ashore up a rope ladder.  Every year he spent a week or two at Reid’s Hotel in Madeira, swimming in the sea.  The President of Madeira gave him a Madeira honour at Ronnie’s 99th birthday party on the island.

At the beginning of this year the likelihood of his celebrating his century looked very high. In January he was at a performance by the Canterbury Choral Society of The Messiah and was the first to his feet to lead a standing ovation. He declared it the best performance he had ever seen. The next morning he was emailing busily to follow up on the conversations he had had the night before. In February he got bronchitis which turned to pneumonia, and in March he emailed a friend that the antibiotics were not working and this was probably it.

Roger Moate was MP for Faversham from 1970, when he unseated Terry Boston, until 1997, when Faversham unseated him. Boundary changes resulted in the Faversham constituency being carved up. In Faversham and Mid Kent, the more promising proposition, both he and Andrew Rowe, who had been MP for Mid Kent, were competing to be candidate. Roger was not included in the shortlist for Faversham and Mid Kent and instead stood for election in the less promising Sittingbourne and Sheppey, most of which had been part of his former constituency, and lost by a narrow margin to Derek Wyatt.

Roger was an assiduous constituency MP. The Faversham Times spoke of his ‘tireless passion and total commitment.’ On the national stage he had quickly marked himself out as a rebel because of his opposition to EEC membership. His views kept him out of any ministerial office. He was knighted in 1993.

One of his directorships took him into a successful legal battle in Norway, a country he knew well and loved. Meeting his QC, who was wearing a tie made up of international signal flags, Roger observed pointedly ‘nice tie, good message.’ How so, the QC responded. ‘Ah,’ said Roger, ‘the signal reads “I am very expensive”.’

Roger was married first to Hazel Skinner, in 1960. They had two children, Andrew and Sally. Their marriage was dissolved in 1984. Roger then married Auriol Chan, and they had a daughter, Sophie. When Auriol died of cancer in 2016, Roger finished his eulogy to her: ‘If only every marriage could be half as happy as ours.’

Having lived at Hartlip and then close to Torry Hill, the Moates moved to Newnham in 1993, to a house dating in part from the 16th century with fine external painting  about which Roger became passionately knowledgeable. In retirement he played tennis vigorously. He was an energetic churchwarden at Newnham. With Bill Croydon he spearheaded the restoration of the Assembly Rooms in Faversham, where he and Auriol usually attended the Saturday morning concert. He was very musical, and played the piano on the morning of his death. Enthusiastic and kind, he was self-deprecating about his musical and other talents, though prepared eventually to allow his doggerel verse into the public view: he published a collection, which was in the Belloc tradition.

Roger was always intensely loyal to Faversham, and in the last year of his life moved to a house in Court Street, which allowed him to potter along to the wine bar and to Ask, which became his canteen.