The Garden Cottage at Stonebridge Lodge 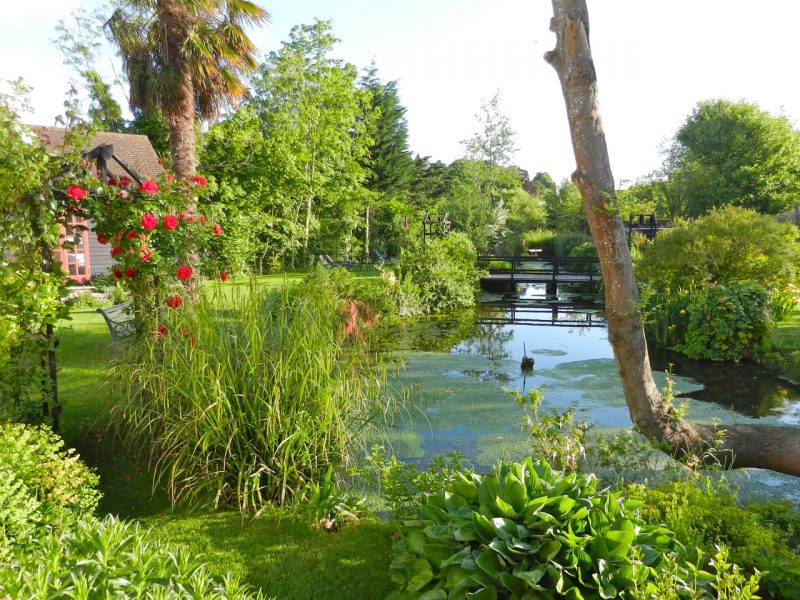 The cottage is surrounded by a glorious garden

Garden Cottage is Faversham’s most delightful place to stay. Set in a corner of a glorious garden surrounded on three sides by water, it has the sleekest of modern interiors concealed in a fairy-tale cottage wrapping. The garden belongs to Stonebridge Lodge, a long, single-storey Grade II listed building in West Street, next to Stonebridge Pond. 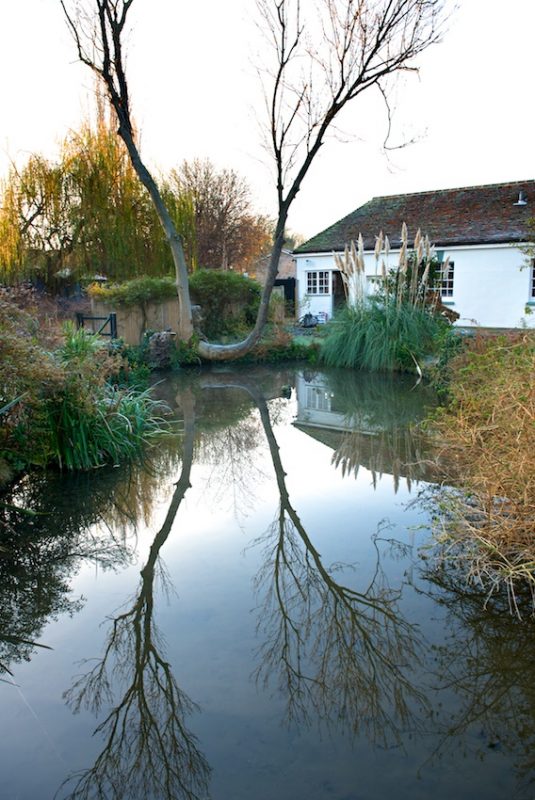 Built in the late 18th century, the lodge was described in 1806 as a watchman’s house, serving the Lower and Bennet gunpowder mills, which were part of the Home Mills within the Royal Gunpowder Works. The building was an armoury during the Napoleonic War and a school from 1848-61. By the time Liz and Tony Sharp discovered it in 2011, the house was, says Liz, ‘in a dreadful state, with lurid colours on the walls, Artex ceilings and a huge brick fireplace in the middle of the sitting room’. Leylandii filled the garden, blocking the splendid views.

For many years, Tony and Liz were sailors, and later plied the French canals in a barge. Returning to England after a stint in Florida and Maine, they rented a property in Rye, chosen because it was midway between Canterbury and Poole, where Tony’s sons were living. Tony and Liz stayed in Rye for two years while they sought a buyer for their American house. The house suddenly sold, but their budget, and therefore choice, were limited. Searches for a property they liked were dispiriting. ‘Because we had so little money’, says Liz, ‘we were looking at the lower end of the market.’ While Tony was watching football one evening, Liz was online. ‘This one property popped up on Google.’

They went to Faversham to see the house the next day, fell in love with it and promptly bought it. They realised they didn’t really know Faversham, so a week later they came back, walked down West Street and had lunch at the Sun Inn. That did it. ‘We feel doubly blessed that we found the house and it came with Faversham attached.’ It was a labour of love and determination to take the house back to its clean, functional lines and to modernise it accordingly. The next challenge was to clear the garden of conifers and reveal the configuration of surrounding pond and waterways, the allotments and the ancient buildings that form the boundaries of the immediate view. 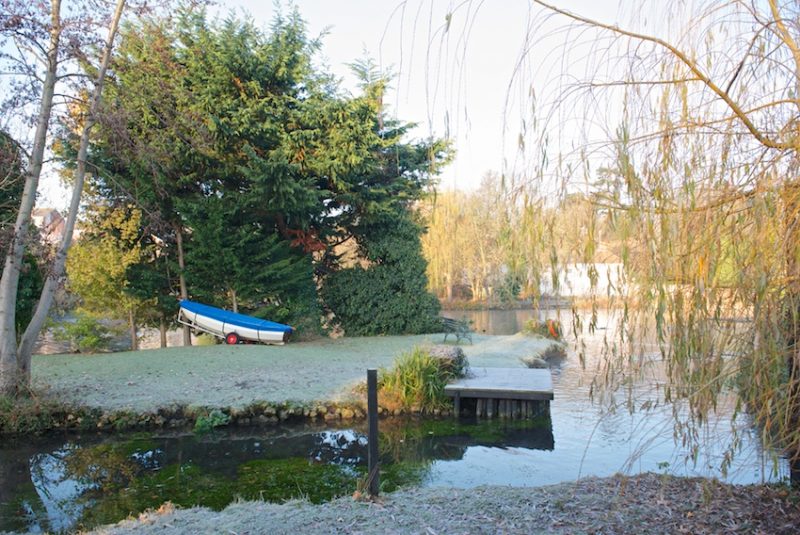 The surrounding pond and waterways

The garden that has been sprung from the stranglehold of leylandii (properly known as Cupressus x leylandii) is exceptional. It is screened from public view by the house, and is bordered by Stonebridge Pond and the Meadowbrook stream. A leat, a canal dug for moving gunpowder around the mill, leads towards the house. From the bridge that crosses the leat, a sunken gunpowder punt is visible. Replacing the impenetrable conifers are weeping willows, banks of hydrangeas, rose arches and pampas grass. Coots, moorhens, mallards and a lone pheasant potter happily. Rocky, the gorgeous Barred Rock speckled hen, accompanied Liz and me on our tour. Later we met up with Boris, the bantam cockerel, and his much larger wives. The chickens have a large run, but are kept in in spring when the foxes have cubs to feed. 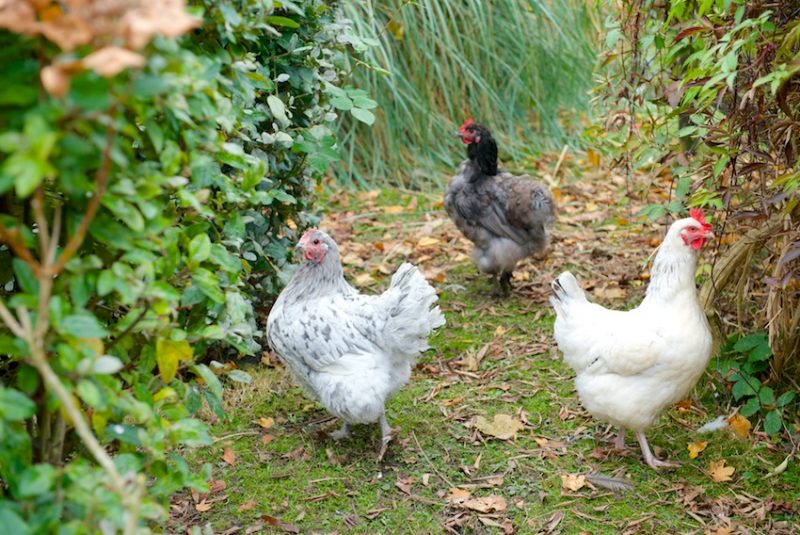 Hens potter happily in the garden

‘The little cottage thing,’ says Liz, ‘was already here. We would never have put it up as it blocks the view of the pond.’ At first they used the cottage for guests, but in 2012 decided to create a website and put it on Airbnb. ‘The damn thing took off so fast it made your head spin,’ recalls Liz. The cottage is in demand all year round, with many guests visiting family and friends, and also 30-something professionals who come for the weekend to walk in the coastal marshes and enjoy local restaurants. ‘It’s our website’, says Liz. ‘We bring people here and then they fall in love with Faversham.’ It should also be said that the reviews by visitors are full of praise for the kindness of their hosts and the quality of the B&B. 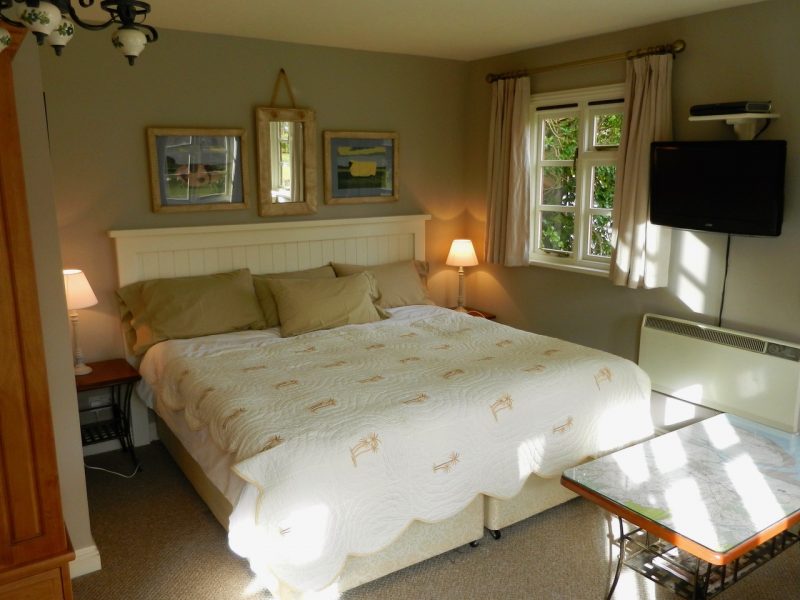 The interior of the cottage is comfortable and modern

In addition to the attractive modern furniture and elegant shower room, the cottage’s mod cons include Sky TV, WiFi and a glass-sided Magimix toaster that Liz says makes the best toast in the world. There is no kitchen, but a fridge is stocked with good things for breakfast. Free-range eggs come courtesy of Liz and Tony’s hens (an electric egg cooker is available), and Liz makes artisan bread with French flour. Weather permitting, guests can eat in the garden – under a palm tree – or just sit and absorb the peace and beauty of the place. 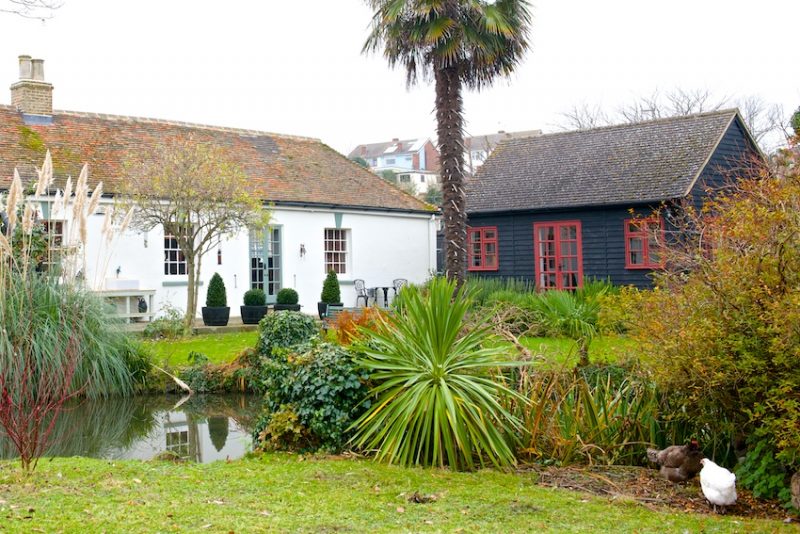 A palm tree provides shelter for breakfast in the garden

Just a few seconds’ walk away is the architectural feast of West Street, followed by the Market Place, which is packed and busy on market days and quietly, disarmingly beautiful and uncluttered on others. The Garden Cottage is perfectly positioned for enjoying everything that inexhaustible Faversham has to offer. 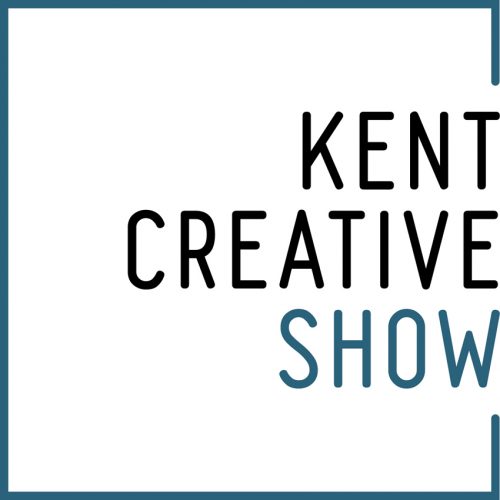