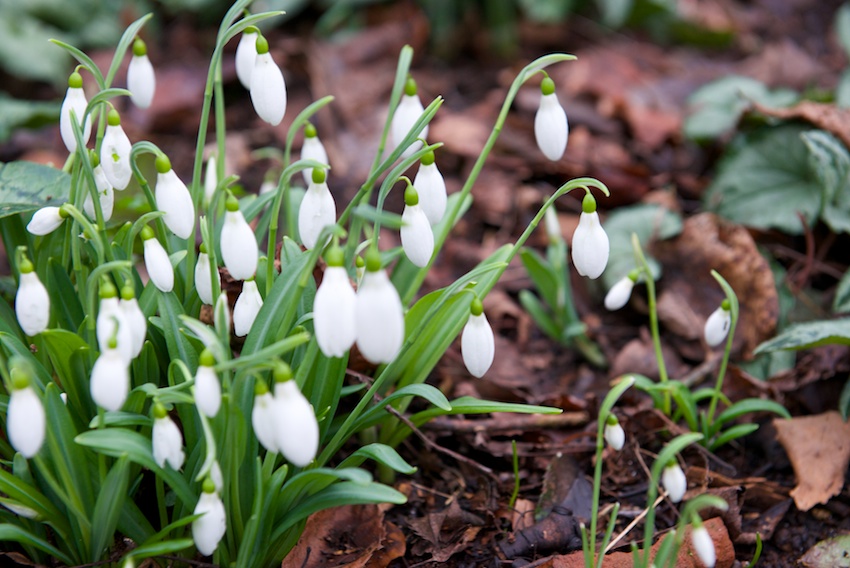 I arrived at Copton Ash on a cold February afternoon, firmly of the view (oh philistine that I was!) that snowdrops are lovely in drifts and caring little for such peculiarities as yellow ovaries or blotched segments. I left, a committed Galanthophile, seduced by slender Galanthus ‘Wasp’, beguiled by the soft glow of G. plicatus ‘Wendy’s Gold’, enchanted by the voluptuous grey leaves of G. elwesii ‘Kite’.

Copton Ash Garden and Nursery on the Ashford Rd in Faversham is run by Tim and Gillian Ingram. It is opening for the National Garden Scheme Snowdrop Festival this Sunday 12 February from 12am to 4pm. If you want to make your garden a joy in February, I recommend you go.

Snowdrops, or Galanthus to give them their Latin name, are a promiscuous lot. Tim Ingram thinks there are probably 100 to 150 varieties at Copton Ash – ‘There’s a lot of crossing’. Named varieties run into thousands. Be careful! Galanthophilism can become an addiction and empty your pockets fast. Two years ago, a single snowdrop (G. plicatus ‘Golden Fleece’) sold for £1390, plus £4 postage. For the less hardcore among us, Copton Ash will be selling many completely affordable varieties. 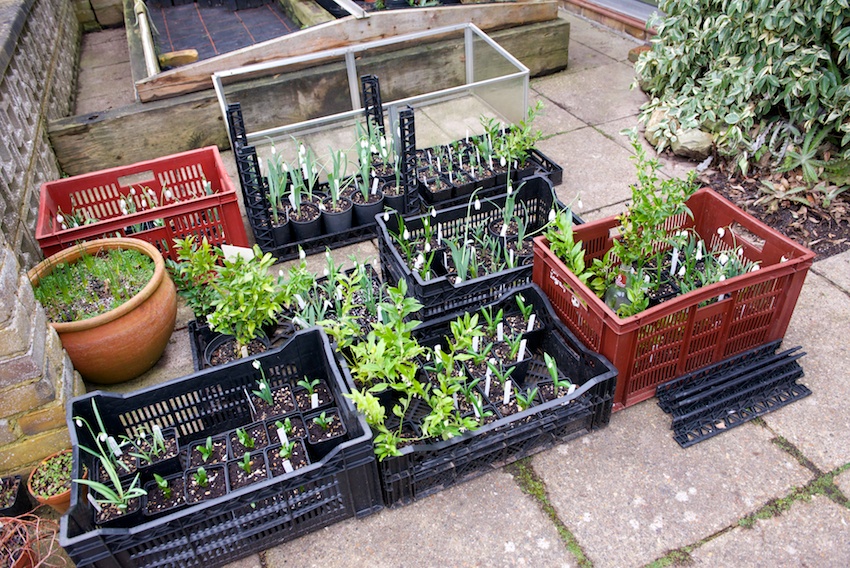 Snowdrops are best planted out now ‘in the green’

The committed Galanthophile will kneel heedlessly in frigid February earth and gently lift the delicate white head to see the markings on the inner petals. In a pot, one can admire the charming nuances of individual snowdrops in greater comfort but Tim doesn’t recommend keeping snowdrops in pots all year round. He says: ‘They can get too wet in the summer and rot off. Plant the snowdrop out again after it has flowered.’ 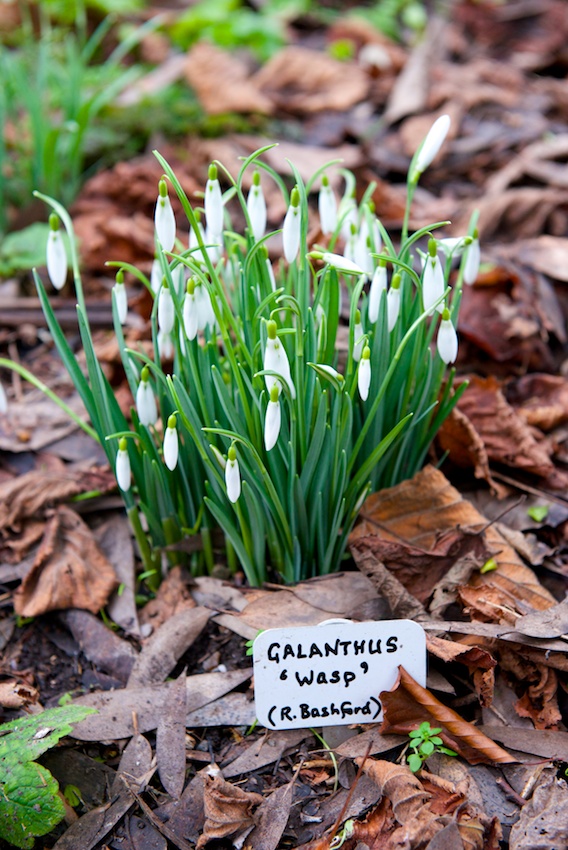 It is best to plant out snowdrops ‘in the green’ rather than as dormant bulbs, and they will soon naturalise and bulk up. Tim advises moving and splitting your clumps of snowdrops before they become too congested to protect them from such horrors as narcissus fly and to increase your stock. Tim has also planted whole seed pods as they are turning yellow: ‘It took only three years before they flowered.’ 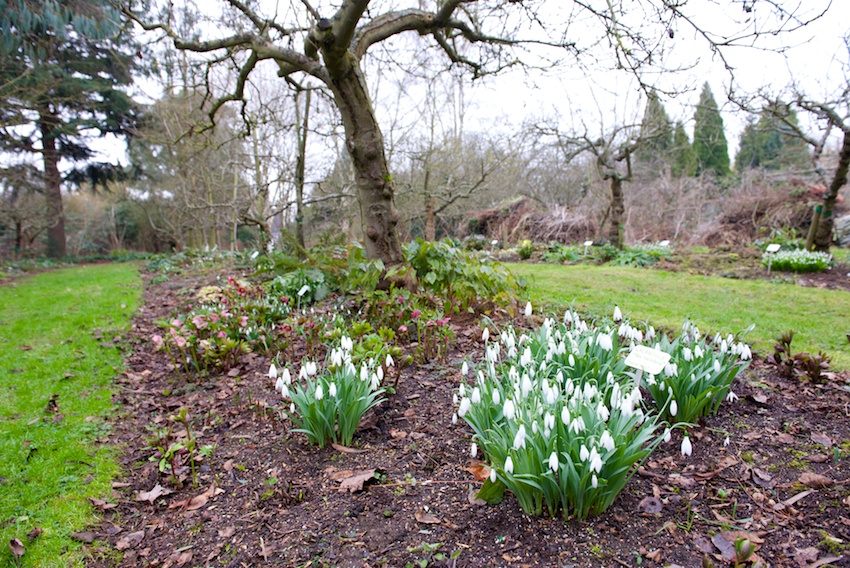 Snowdrops grow happily under deciduous trees, flowering mainly in February, and drying out in the summer. They don’t like to be waterlogged. G. nivalis is the common snowdrop we see in drifts in Lorenden Park or in the woods in the Syndale Valley. Such stunning dramatic drifts can be seen swathing the feet of towering Wellingtonias at Doddington Place Gardens, also opening for the National Garden Scheme Snowdrop Festival, on 19 February (11am to 4pm).

But at Copton Ash, I learned how to use snowdrops in the smaller garden. Snowdrops arrive in February, pushing their pure white heads through sodden leaves. Tim says it’s a good incentive to get into the garden and start clearing up so they can be seen. He plants snowdrops with hellebores and cyclamen, which flower at the same time to exquisite effect. Tim also plants snowdrops among clumps of evergreen ophiopogon planiscapus ‘Nigrescens’ – the effect of gleaming white heads floating against the black grass-like leaves is stunning. 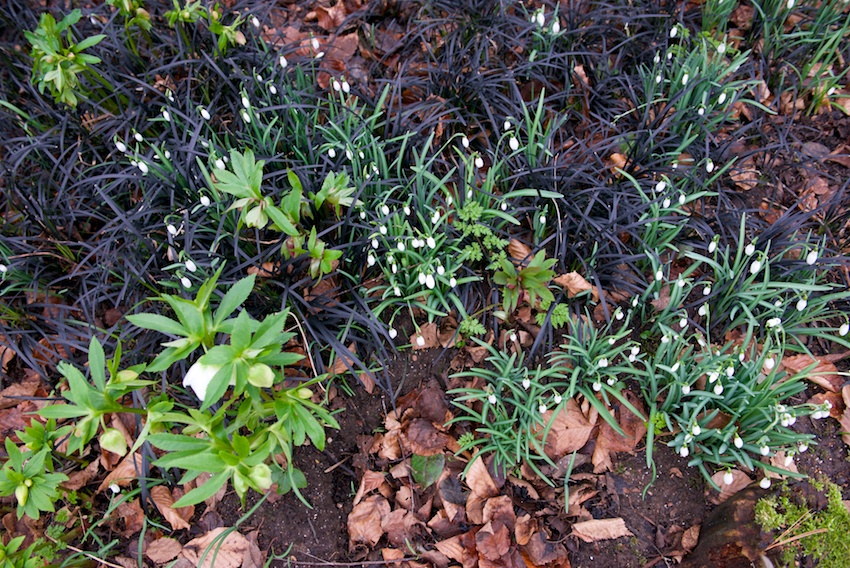 The Ingrams show us how to plant for continual interest in the garden in late winter and early spring before the summer riots. The borders, now filled with snowdrops, cyclamen and hellebores, are abundantly planted with later-flowering spring bulbs such as erythroniums which will come into flower as the earlier flowers die down. The early growth of perennials and the leaves of ferns and epimediums adds a verdant backdrop. 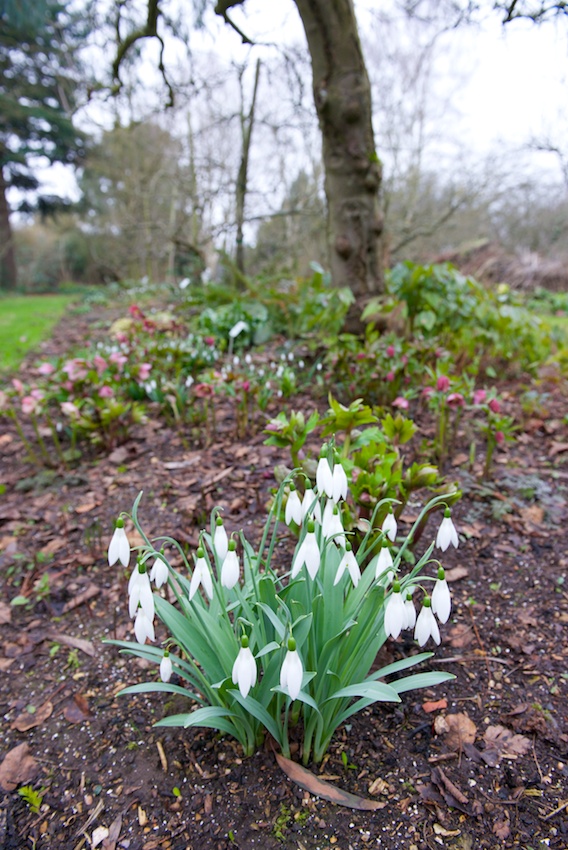 Tim says: ‘The leaves can give almost the same effect as hostas.’

Look for this at the far end of Copton Ash Garden where rows of dwarfed fruit trees, planted by Tim’s father Jack, a Brogdale man, are beautifully underplanted.

The huge variation in snowdrops means that they can be used for particular effects.Tim says that some Galanthus varieties are valuable for their foliage after the flower is finished. G. woronowii has a lush growth of shiny bright green leaves in which the flowers sit like pearls, offering excellent ground cover. The leaves stay fresh affording a bright backdrop for later-flowering spring bulbs like erythroniums and scillas. Elwesii varieties will tolerate, even prefer, a sunnier spot near the front of the border. They have larger flowers than nivalis and wide grey-blue leaves. Tim says: ‘The leaves can give almost the same effect as hostas.’ 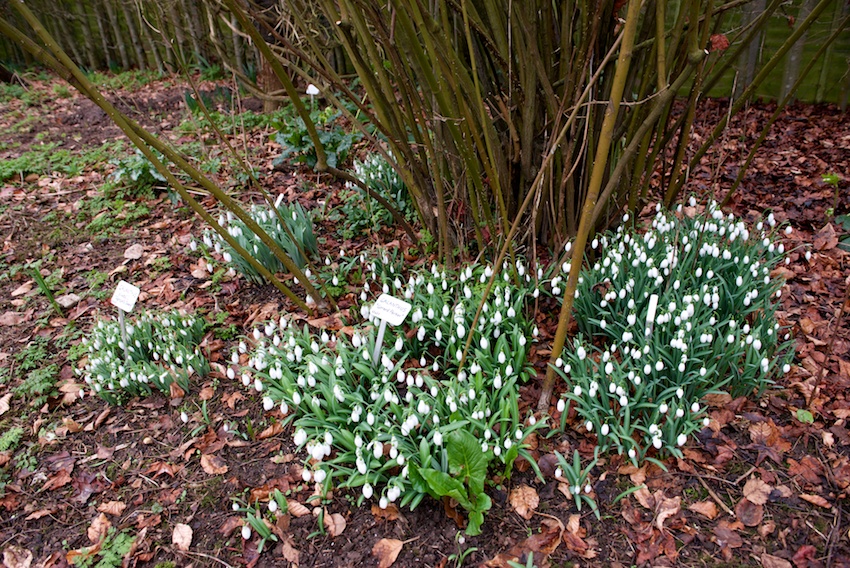 The borders, now filled with snowdrops, cyclamen and hellebores, are abundantly planted with later-flowering spring bulbs such as erythroniums which will come into flower as the earlier flowers die down

Copton Ash is planted on 1.5 acres and Tim’s parents moved there in 1978 to be near Brogdale. Tim says: ‘It was mostly planted with cherry trees, so we knew the soil was good.’ Many of the eucalptuses and conifers in the garden were grown from seed by Tim. He is a stalwart of the Alpine Garden Society and the nursery at Copton Ash stocks many covetable and unusual plants. 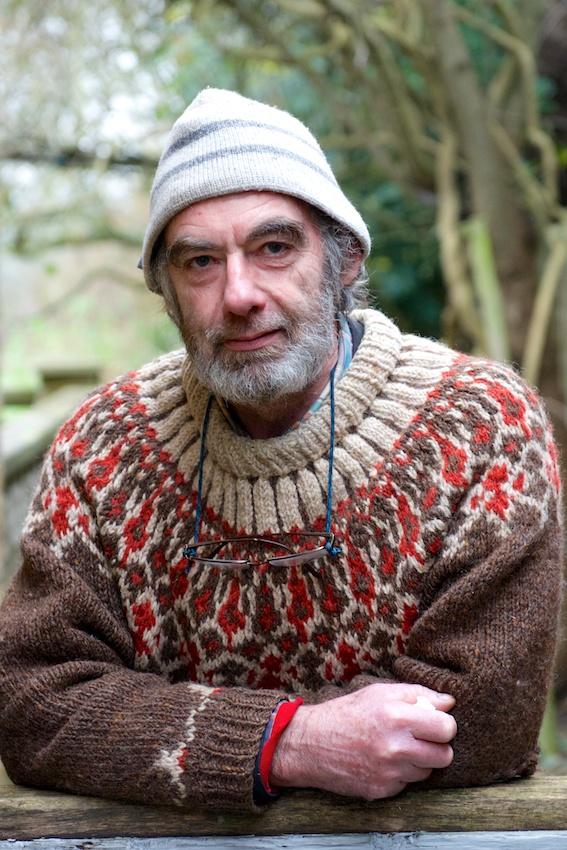 Sunday is an opportunity to see and buy some of the unusual and rare snowdrops that grow at Copton Ash. Here are a few which ensnared me into Galanthophilia:

Galanthus ‘Fly Fishing’ – has an unusually long pedicel so the flower seems to float away from the stalk. Early flowering.
Galanthus plicatus ‘Diggory’ – has a large, bowl-shaped flower and the petals are gently puckered so they look like seersucker.
Galanthus ‘Wasp’ – the slenderest flower.
Galanthus plicatus ‘Augustus’ – named after the British plantsman E A Bowles (his middle name). Large round flowers and green pleated leaves. This has multiplied well for the Ingrams in a dry patch under a medlar tree.
Galanthus plicatus ‘Copton Trym’ – appeared in the garden as a seedling of ‘Trym’ which is celebrated for the green blotches on its petals.
Galanthus elwesii ‘Ransom’s Dwarf’ – only 7cm tall in flower.
Galanthus elwesii ‘Kite’ – sometimes twin flowers. Large grey leaves.

Copton Ash, 105 Ashford Rd, Faversham ME13 8XW, is open for the National Garden Scheme Snowdrop Festival on 12 February 12am – 4pm. There are further openings and nursery sales throughout the year. Please visit www.coptonash.plus.com 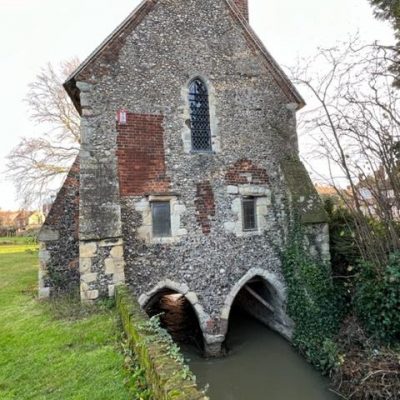