We all know that Faversham is full of books and booklovers, but sometimes the richness of the town’s book culture has lain hidden in plain sight. 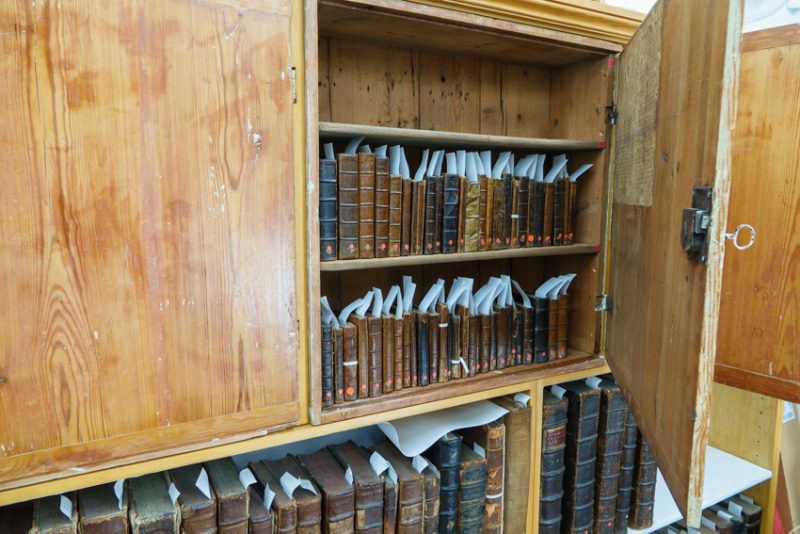 Part of the Doddington Parish Library

A case in point is the so-called Doddington parish library. Though the library’s origins lie in the nearby village of Doddington several centuries ago, this remarkable collection of old books has been in Faversham since the 1980s, carefully curated, but rarely visible to all but the most inquisitive and persistent of scholars. Last month a new chapter in its history was begun when Faversham’s Town Council celebrated the successful transfer of the library to a special room in their offices at 12 Market Place, where it will be kept and made available for study by appointment. 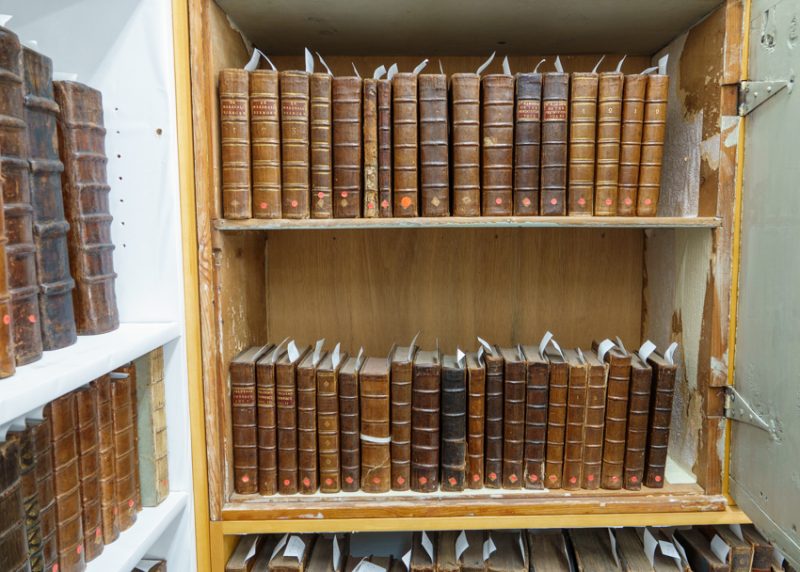 Another view of the library

The Doddington parish library contains nearly 400 printed books, most dating from 1600s and 1700s but with the oldest printed in 1505. Around 280 of them were printed in England, the remainder on the continent. The collection was formed in the early 1700s by Daniel Somerscales for use in his work as vicar of Doddington, to which were added some 30 books by John Radcliffe (or Ratcliffe), a Doddington vicar of the early 19th century. Somerscales’s original collection was housed in a series of wooden travelling cases, some of which have happily stayed with the collection through its successive moves and are preserved at 12 Market Place as part of the shelving of the library. The cases are important because they help explain the origins and intentions of the library, as well as preserving paper labels listing the original contents of at least one of the cases. 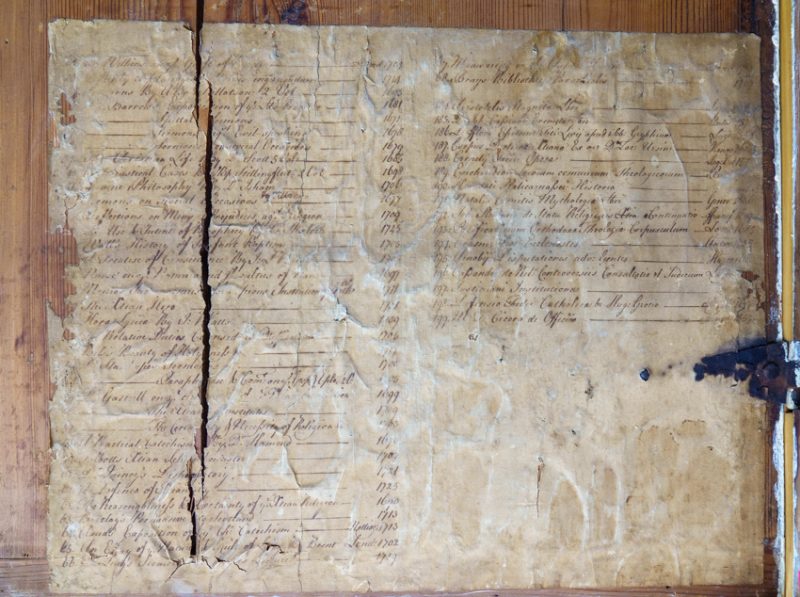 An early manuscript library list preserved inside one of the chests

The Doddington library was formed as part of a wider movement in Britain and America around 1700 to provide books for the parish clergy — access to traditional collections in universities and cathedrals was limited to the very few. The aim was not only the better education of the clergy, but also of the population in general. Remember that at this time, before mass literacy and a popular press, words spoken and heard at the pulpit served as a powerful means of communication of news and ideas. The leading light in the movement was one Thomas Bray who arranged for ready-made libraries to be sent out in wooden cases to parishes or individuals who had raised a subscription. It was a transatlantic enterprise and there survive comparable parish libraries in England and North America. While these were never public libraries in the modern sense, being mainly for the use of the clergy, it is in these little parish libraries that we see the first glimmer of an idea for the great public library movement of the 19th and 20th centuries, the fruits of which we should treasure and guard jealously today. 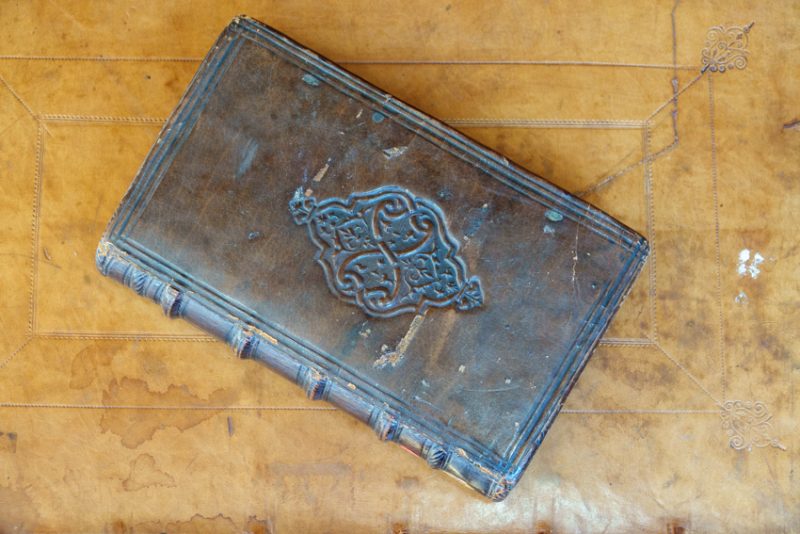 For the first 240 years of its life the library was stored in its cases in the vicarage at Doddington. It was perhaps actively used for 100 of those years, but evidently quite carefully. One of great virtues of the books today is that they survive, largely unrestored, in their original bindings from the 16th, 17th and 18th centuries. Books in larger public collections used over a long period can often be almost read to pieces and have been repaired or entirely rebound — a well-meaning act which can inadvertently destroy historical evidence when covers and endpapers are discarded. For much of the 19th and 20th centuries the Doddington library lay mostly untouched in the cool, dark but dry environment of the vicarage benefitting from benign neglect. 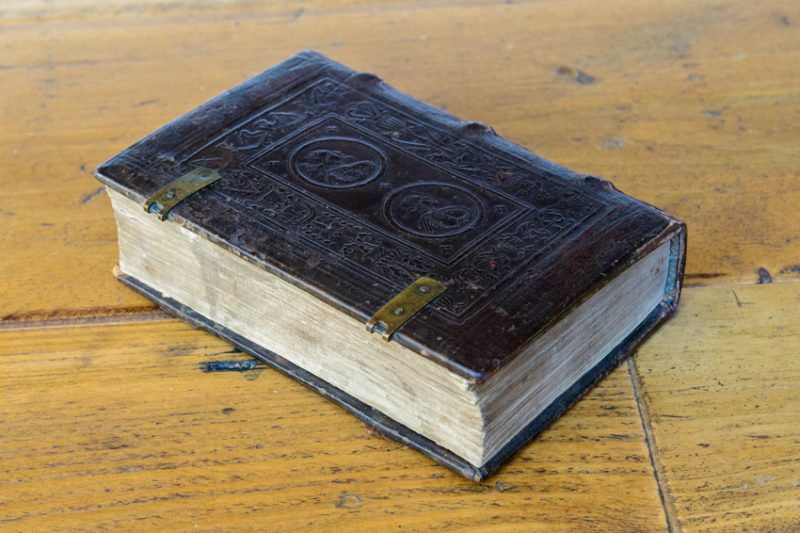 One of the most interesting early English panelled book bindings –  on an edition of Eusebius’s ‘Commentarium in Pauli Epistolas’, printed Cologne, 1531 but bound in England.

When the Doddington vicarage was sold in the 1980s, it was through the care and persistence of the Doddington Parochial Church Council, the Nightingale family, together with members of the Faversham Society that it came to be here in Faversham, housed in a purpose fitted room at the top of the Fleur de Lis Heritage centre. It was carefully listed and grants sought for essential restoration according to modern conservation standards and the physical environment of the library room was monitored punctiliously and recorded. The only drawback of the library room was its position in the attics of the Fleur which left the books vulnerable to potential fire and water damage and quite inaccessible. Those of us who visited the library there will recall the treacherous steps leading into the attic, navigated with the help of a rope.

At the Fleur a valuable project was undertaken to enter all the English-printed books (281 of them) into the international online ‘English Short Title’ catalogue (see ESTC for the catalogue). Getting library records into accessible online catalogues is now an expected part of caring for a publicly-curated library. Once the agreement with the Faversham Society came to an end, the decision to offer the custody of the books to the Town Council was a sensible choice, allowing the books to be housed in a safe and secure environment while hopefully making them more visible and accessible. 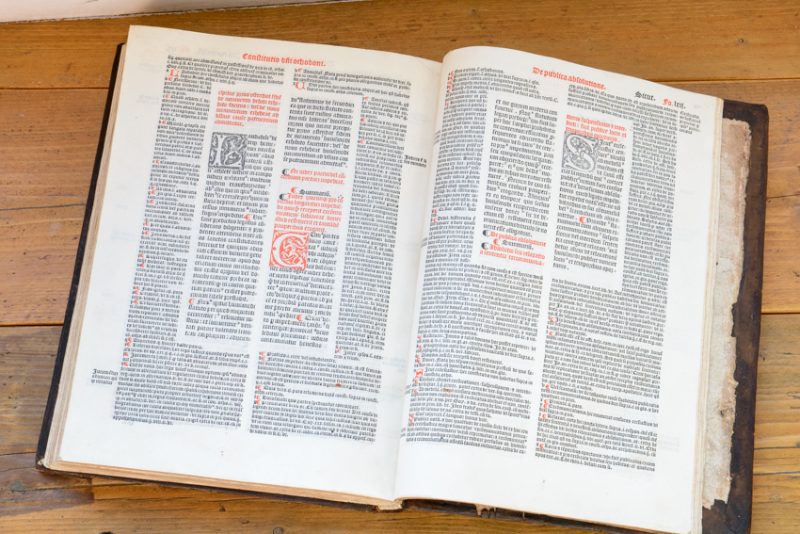 From the earliest book in the library – the ‘Provinciale’ of William Lyndwode printed in Paris in 1505.

It is an exciting prospect and there is much to be done. Efforts are already being made to partner local universities who are actively researching book culture in Kent — in many ways the prospect of this ‘new’ collection of books is a gift of a research project. More needs to be done to make the complete catalogue available online and clearly the Town Council is keen to make visits to the library available to interested local history or arts groups and to school groups. Anyone interested in books, bookbinding, the book arts, archives or libraries would find much to reward them here. We are tremendously fortunate that it remains here in the locality in which it was first put together.

Access is by appointment via the Town Clerk 01795 503286 or  louise.bareham@favershamtowncouncil.gov.uk 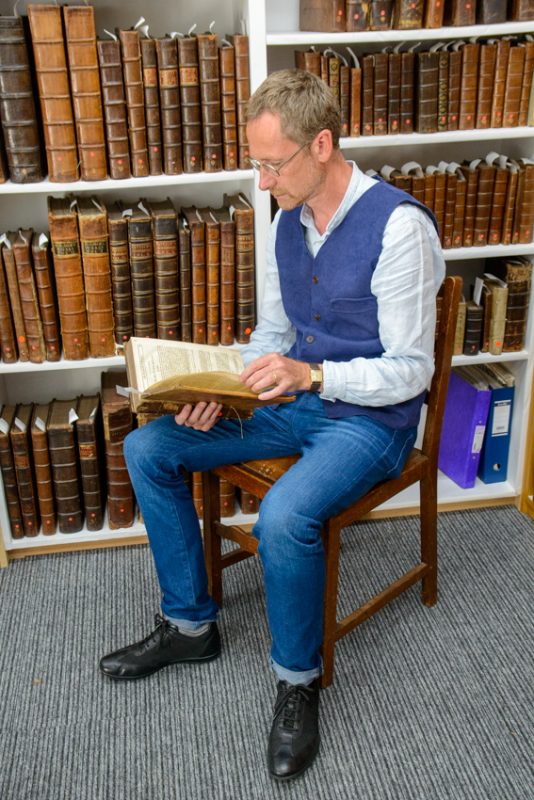 The author in the library 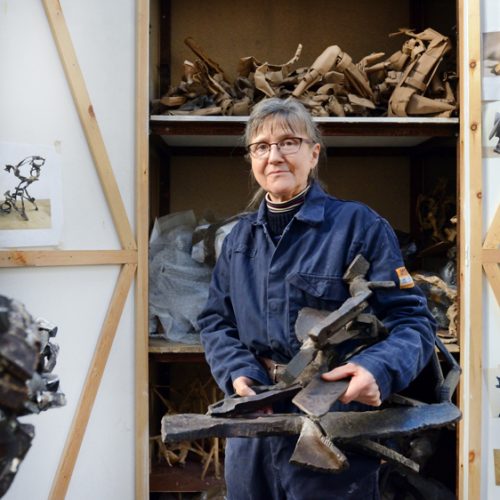