The rumpus that became an orderly procession 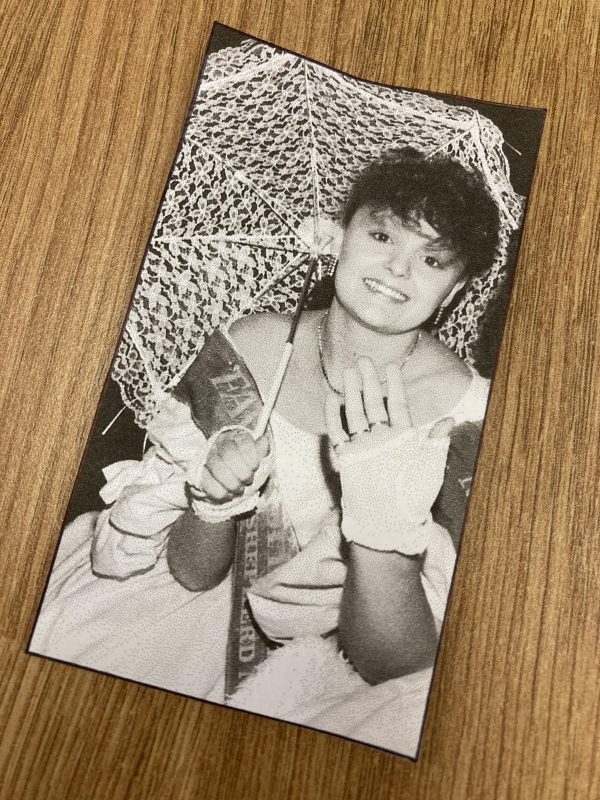 Snapshot of Dawn Drury, Faversham Carnival princess in 1988, and now a volunteer at the Visitor Information Centre in the Market Place

Faversham Carnival began in 1890 when it was lit by torchbearers, and is now the last carnival in East Kent of the season. The roads close. People gather on the pavements as darkness falls, waiting to catch the sound of the tinkling glockenspiels and rattling snare drums which thrillingly announces the arrival of the procession – the marching bands, the waving princesses huddled in furs and dancing in their seats, the cartwheeling gymnasts, and children dressed as ancient Egyptians. 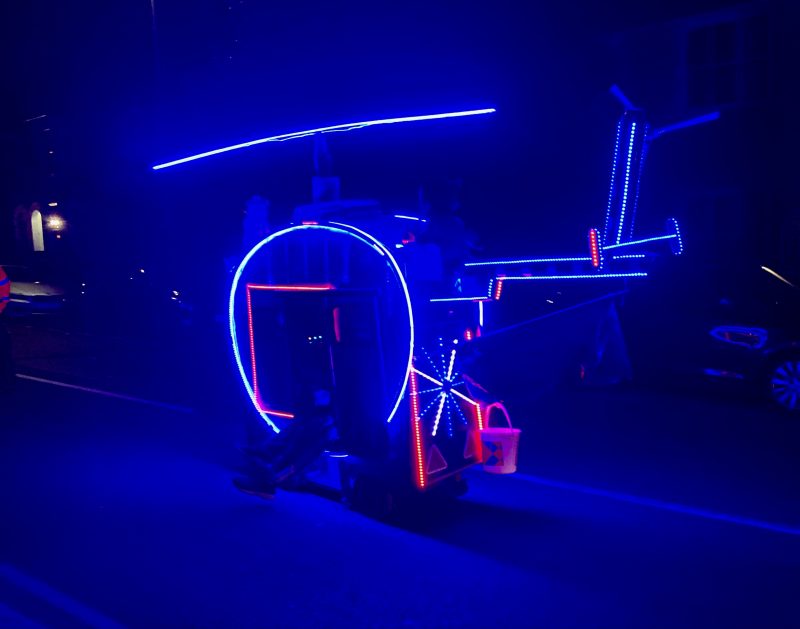 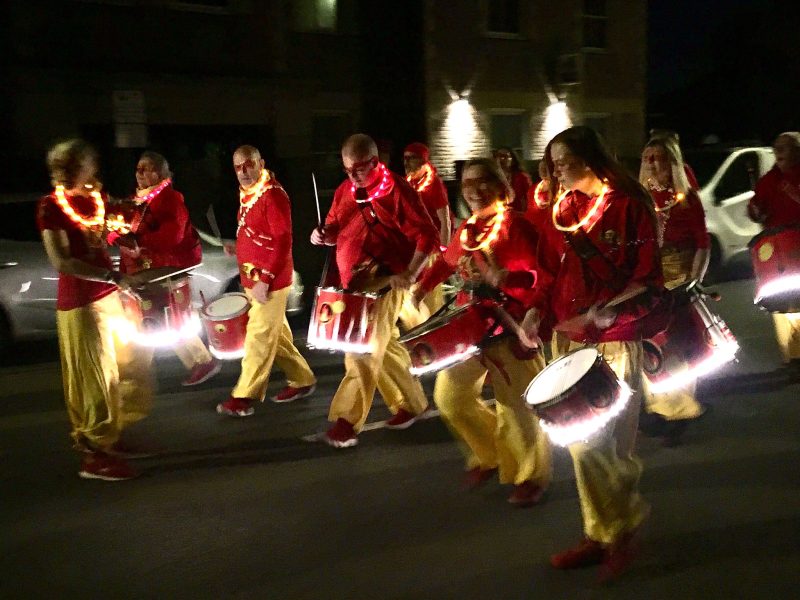 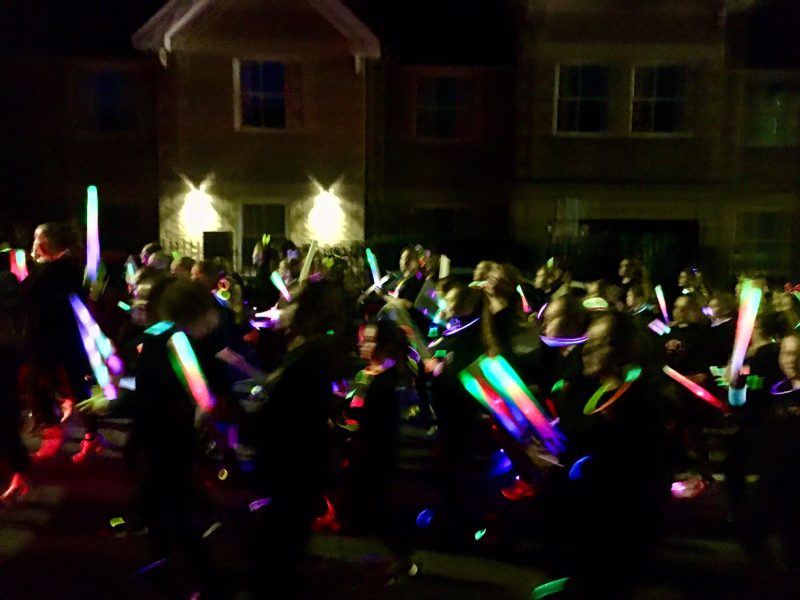 The lights of the October 2022 Faversham Carnival

Faversham Carnival, the fair and the fireworks is the feeling of the arrival of autumn in Faversham and we have put together some memories of its long history.

We stumbled across the British Pathé film, Faversham Carnival aka Animal Carnival (1952), on YouTube and transcribe it here. The exclamatory voiceover is BBC Received Pronunciation, an accent which somehow vanished around the end of the 1960s. ‘Jaunty music “The narrow streets of Faversham in Kent are packed to bursting point as the annual carnival gets underway! More than 40,000 people are here to see the fun and Faversham is certainly giving them their money’s worth! And talking of money – every penny collected during the carnival goes to charity! Last time, they raised £300 but the sky’s the limit this year!” More jaunty music

“Many years ago, local people created such a rumpus on Guy Fawkes Day that troops had to be called out to put a stop to such goings on! Since then, the authorities decided to organise orderly processions through the town, and this sort of show’s the result!” Clapping

“All the pubs in Faversham are staying open late this evening – so I bet that’ll add to the fun in the old town tonight!!!”’ 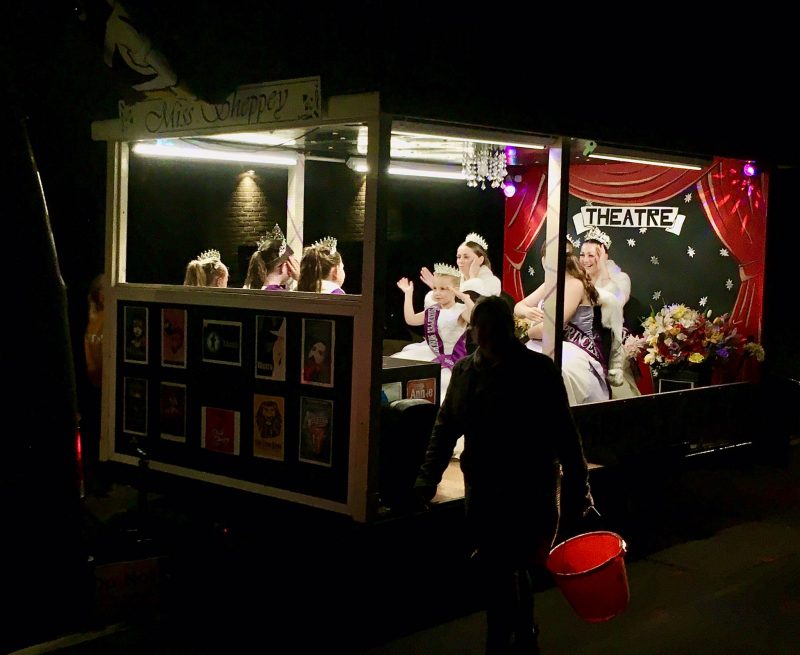 The booklet Faversham 1900-1930 by Miss Eileen English, no 20 in the About Faversham series, elicited the following memory:

‘But the highlight of the year was the torchlight procession held on the first Thursday nearest to the fifth of November. A lot of thought and artistry was put into the building of the cars. There were eastern palaces and pagodas outlined with electric lights that could be seen for miles around, flanked by boy after boy carrying flaring torches. Pocket money was hard to come by in those days. I believe the pay for carrying torches was 2/6d, quite a lot to those whose wealth consisted mostly of a Saturday penny. I remember one car in particular representing Nelson on his column; how that boy balanced as he wobbled along was indeed a miracle. He must have been terrified. 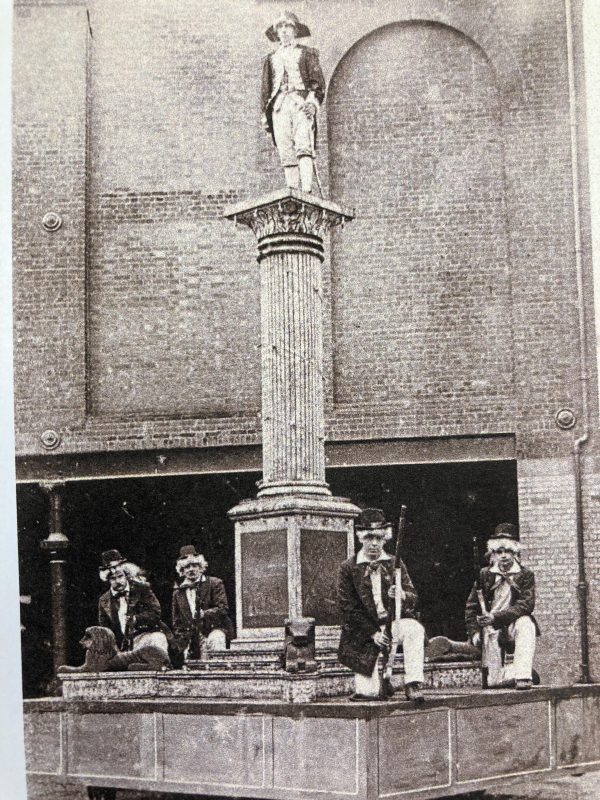 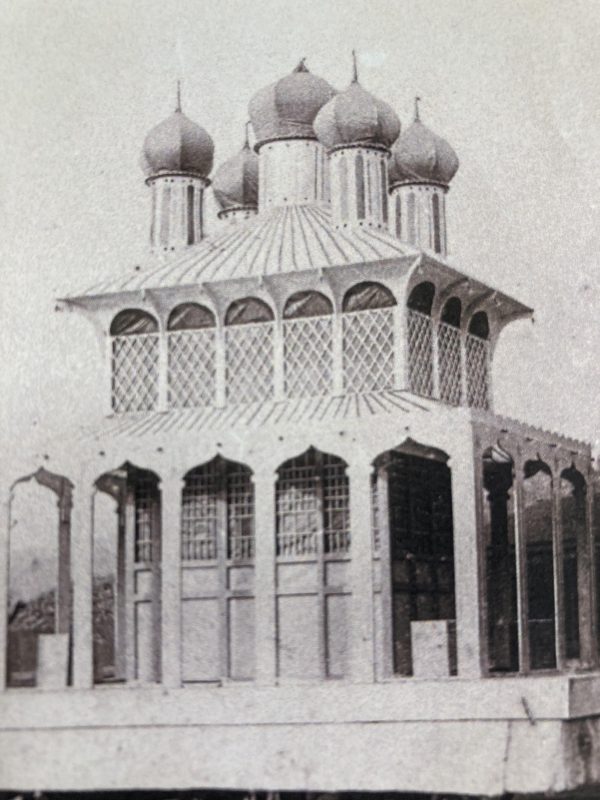 ‘The town was gaily decorated and most of the shop windows displayed some sort of tableau. Austin’s wool and needlework shop in East St, where Tett’s was until recently, always showed a large dolls house with every room above stairs elegantly furnished, and below stairs, implements of domestic use – perhaps not quite as grand as Queen Mary’s dolls house at Windsor Castle but just as interesting.

‘Whilst waiting for the procession, a lot of fun was to be had by girls and boys who carried bladders and what were called “ticklers”, a popular carnival weapon. They were a sort of multicoloured brush on a long twisted wire handle and were used to tickle the faces of the opposite sex as they passed in the crowds, which led to chasings. Quite a battle of ticklers would ensue between rival gangs!’

While perusing the excellent selection of books about Faversham history in the Visitor Information Centre in the Market Place, Faversham Life discovered that Dawn Drury, a volunteer at the centre, was a past princess in the Faversham Carnival Court, and would be on duty the following day.

Dawn Drury was a Faversham Princess in 1988 and 1992. She says: ‘I was 17 and my cousin had done it in the 1960s, so I thought I’d give it a go – it was raising money for charity and the chance to spend a year doing something completely different.’ Dawn went to the Selection Dance at the Alexander Centre where there were four or five judges who interviewed the candidates singly as well as observing them throughout the evening. She says: ‘It wasn’t just about being pretty; they also looked at personality, intelligence and posture.’ 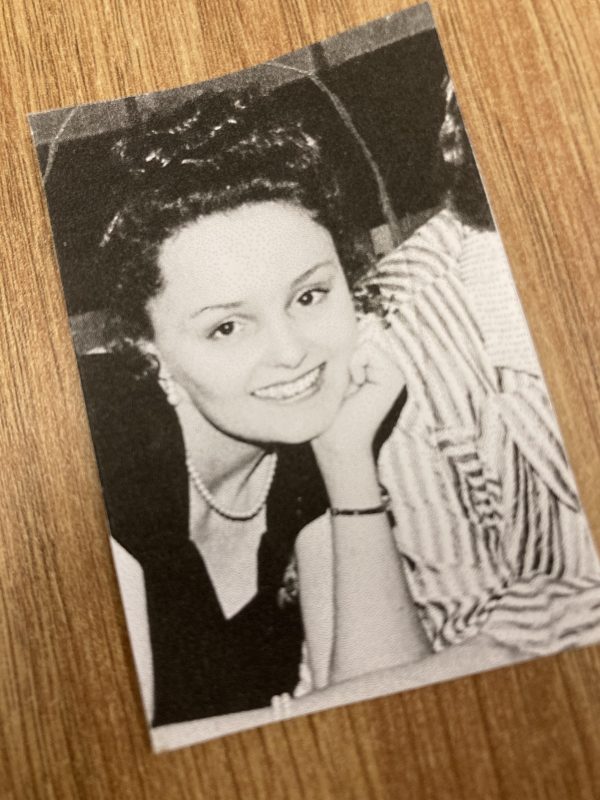 Dawn Drury photographed at the Selection Dance in 1991

It was fun but hard work. Nearly every weekend, and the odd Thursday – from the first carnival of the year in Cheriton and Morehall in June, to the last in Allington in December – the Faversham Court of the queen and two princesses travelled East Kent taking part in processions, preceded by a dinner for all the courts in attendance, and followed by a dance. Each carnival awarded honours such as ‘The Queen of Queens’, of which the Faversham Court garnered a fair few. Dawn says: ‘All the princesses and queens knew each other – we’d go to each other’s selection dances.’

They were out in all weathers – the Faversham queen in white and the princesses in peach – but Dawn says they never wore thermals although they sometimes smuggled a hot water bottle on to the float under their capes. ‘People threw coins on to the float because we were collecting money for charity. At the end of the carnivals, the floor of the float would be covered in coins,’ says Dawn. There was inevitably the odd misshot and she was hit on the nose by a coin in the 1988 Herne Bay Carnival. She thinks the nets they have to protect the floats these days are a sensible move. 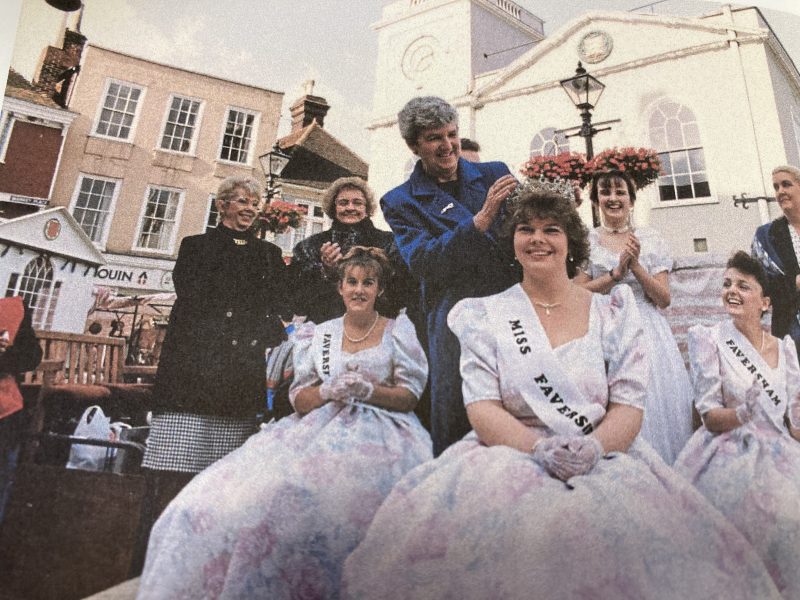 The crowning of the Queen. Dawn Drury on the right. Photograph taken from Robert Turcan’s book, Faversham Through Time

Dawn remembers the 1988 float which was sponsored by Shepherd Neame and featured an oast house. In 1992, they sat in front of a replica of the Guildhall.

In 1988, the Faversham Court hit the national press when they attended a charity half marathon in Faversham to present the medals with Bob Geldof, at that time still quite a newcomer to Faversham.

Dawn says there were then about 20 carnivals in East Kent; today several have gone including the those in the larger towns of Maidstone and Canterbury. As we saw this year, Faversham Carnival is back to its former glory after the Covid lull. Dawn, herself a volunteer at the Visitor Information Centre, believes its strength comes from the nature of the people in Faversham – their willingness to volunteer, support the town and make it fun.