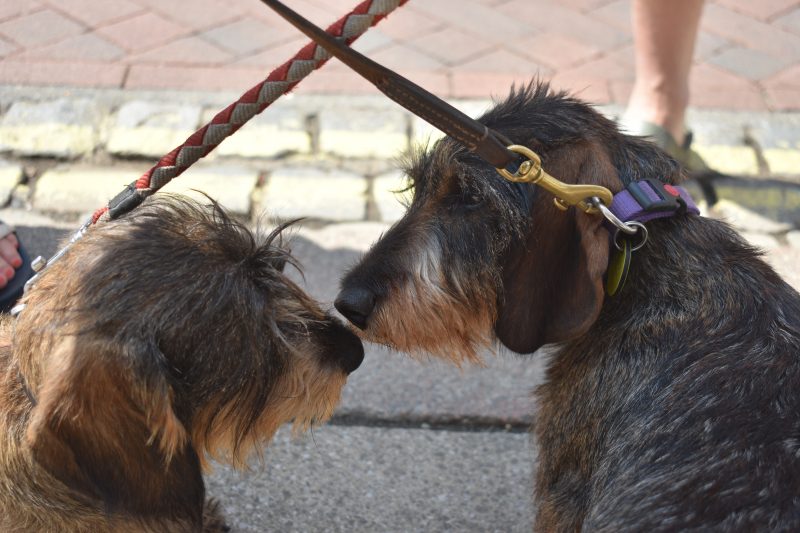 Two Wirehaired Dachshunds exchange a greeting. Harold, of whom more later, is on the left and Patti on the right

Faversham people love their dogs. They parade them with pride on market days, and there is a particularly fine turnout on Saturday mornings when the medieval Market Place bustles with dogs. Here are just a few, with comments from their doting owners. This is Part 1, with another instalment to follow later in the summer. 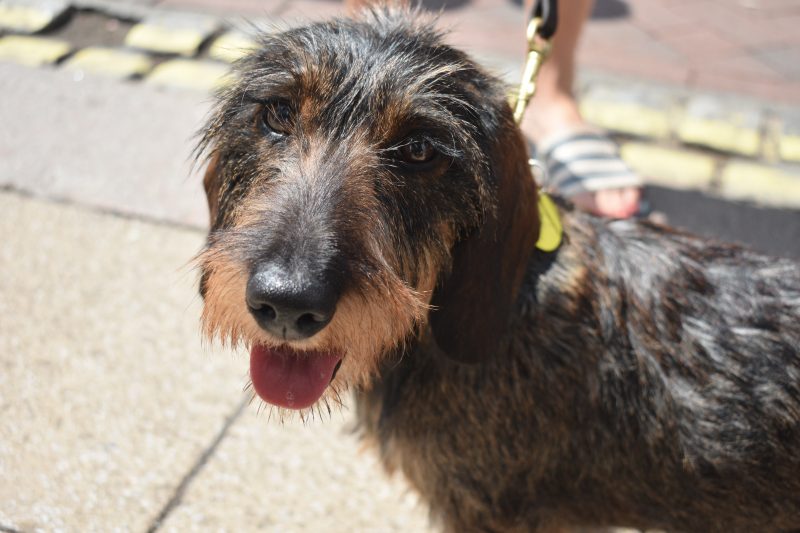 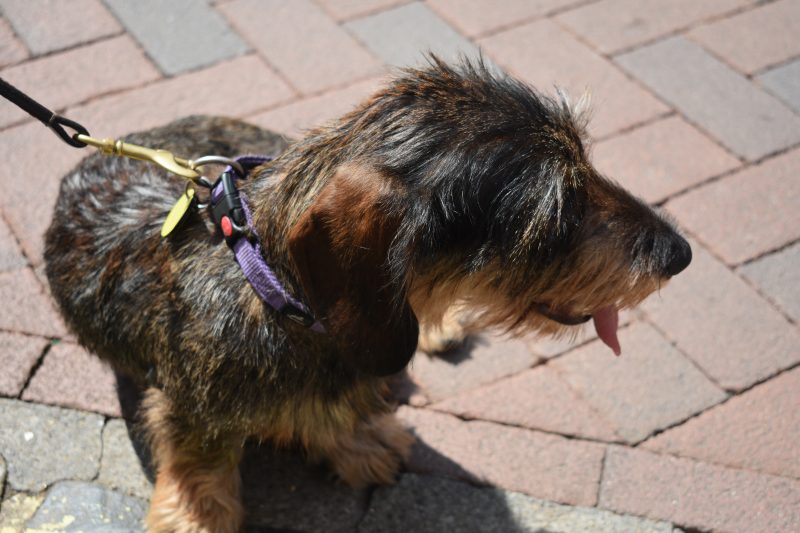 Patti is a Wirehaired Standard Dachshund who is just one year old. She was bred in nearby Selling. Owners Laura and Jack Bamber say she has ‘a very strong personality and is quite stubborn’. She thinks she is bigger than she is and true to her breed she is a vocal guard dog 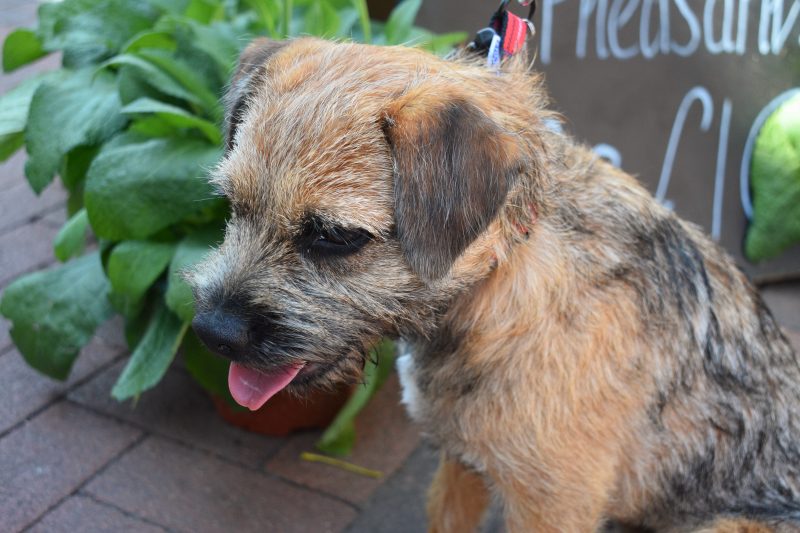 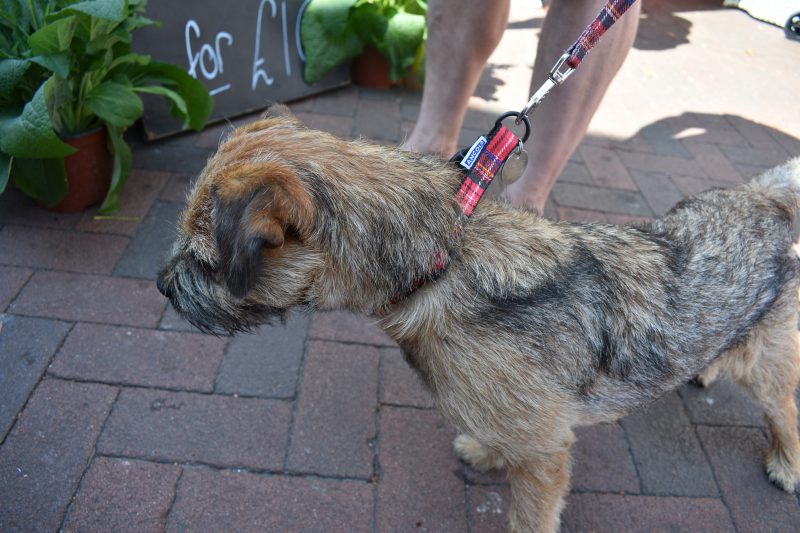 Towser is a six-month-old Border Terrier belonging to Simon Joy. He’s a a feisty small dog who thinks he’s ‘a big dog in a little dog’s skin,’ says his owner. Towser likes going to the markets, has bundles of energy and ‘will just keep playing all day’ 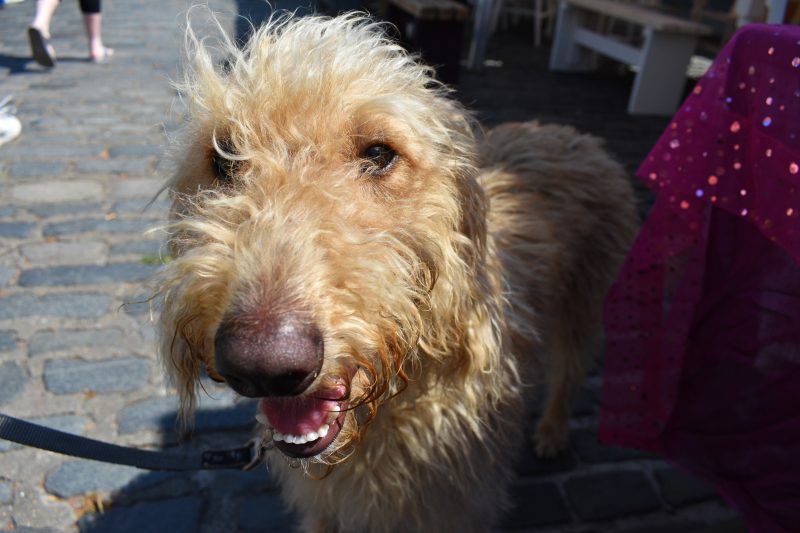 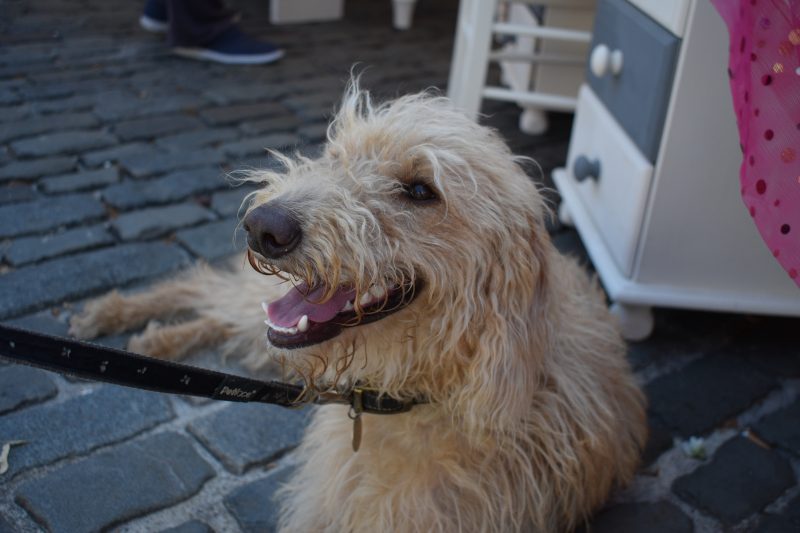 Motsey, which is short for Mozarella, was named by Nathan Carr’s son. He will soon be one year old and is a delightful mix of retriever, poodle and lurcher. He’s friendly, nosy and likes to investigate,’ says Nathan. The family live in Athelstan Road. Motsey goes regularly to their allotment where he enjoys digging 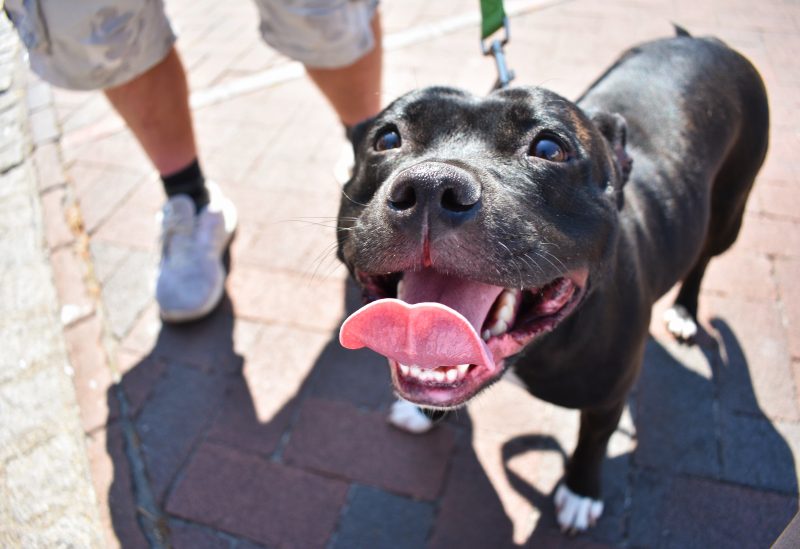 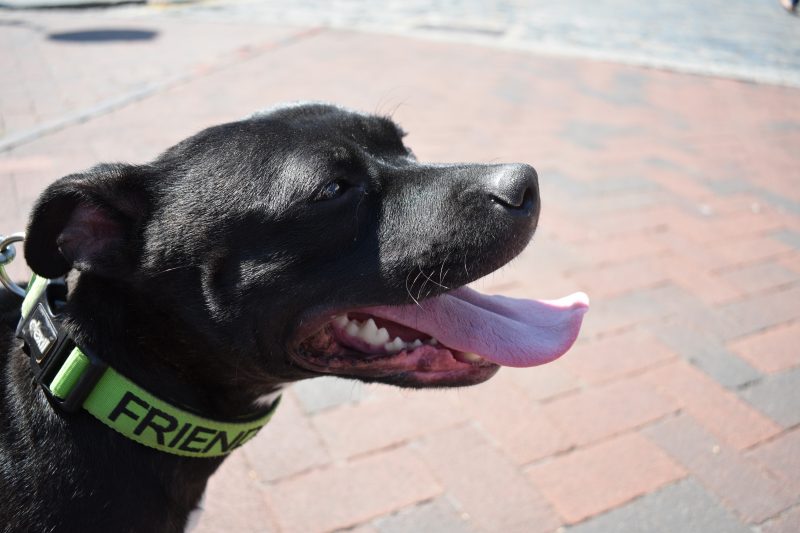 Skye is a pure-bred black staffie (Staffordshire Bull Terrier). Contrary to the breed’s largely undeserved reputation, she is typically friendly. In fact, says owner Andy Parker, who lives near Bysing Wood: ‘She’s soppy and loves a stroke. If you give her a belly rub she ‘s your friend for life’ 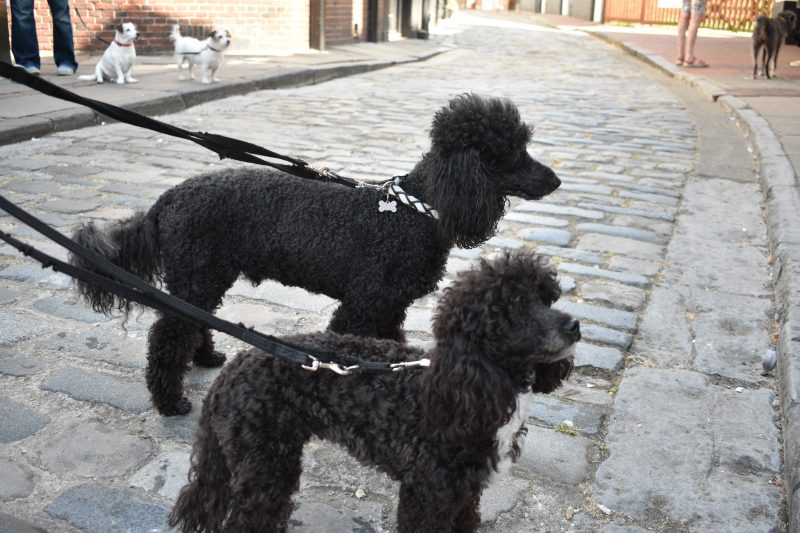 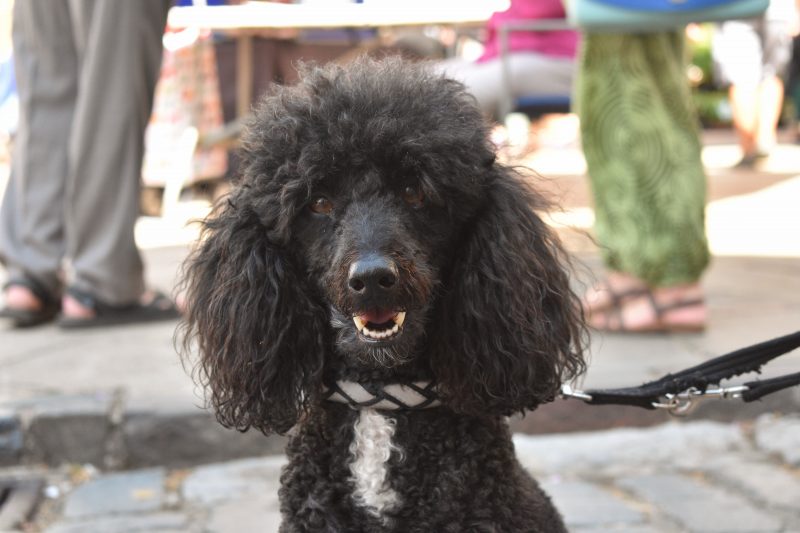 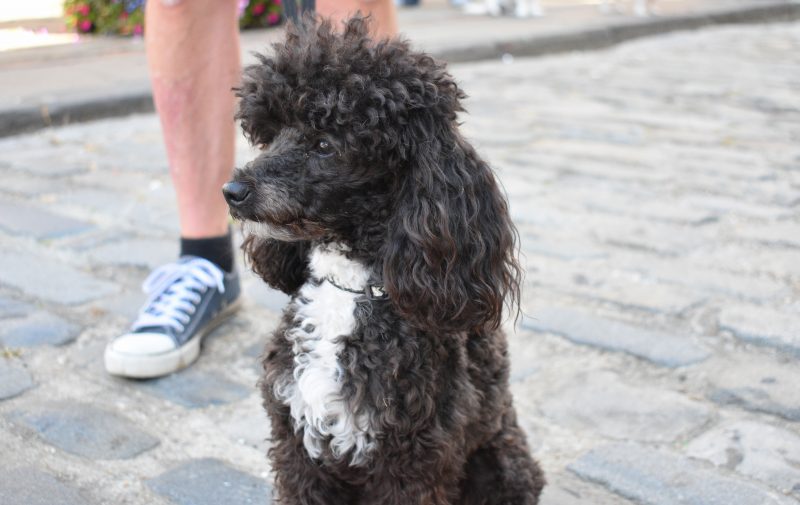 Marley, who is a male Miniature Poodle aged eight and a half, and Marge, a one-year-old female Toy Poodle, make a handsome pair. Marley has a little white stripe on his front, and Marge a longer one. They belong to Andrea and Chris Gautier, who live in Old Hatfield in Hertfordshire but have a static caravan in Seasalter. They all come to Faversham often. Andrea says the newspaper Our Dogs is prominently displayed in newsagents, indicating the popularity of dogs locally. Poodles, the Gautiers say, are very intelligent and sensitive. Marge, in particular, is very speedy; Marley that day was recovering from a poorly foot, having had a dew claw removed the previous day 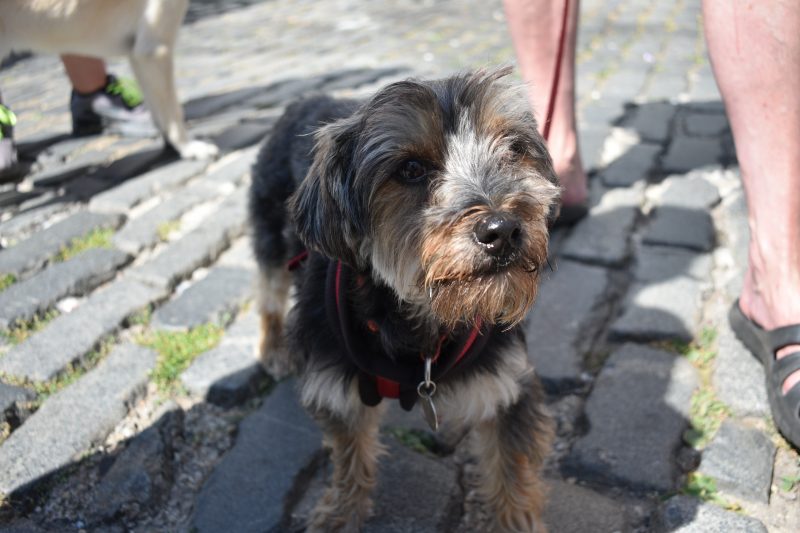 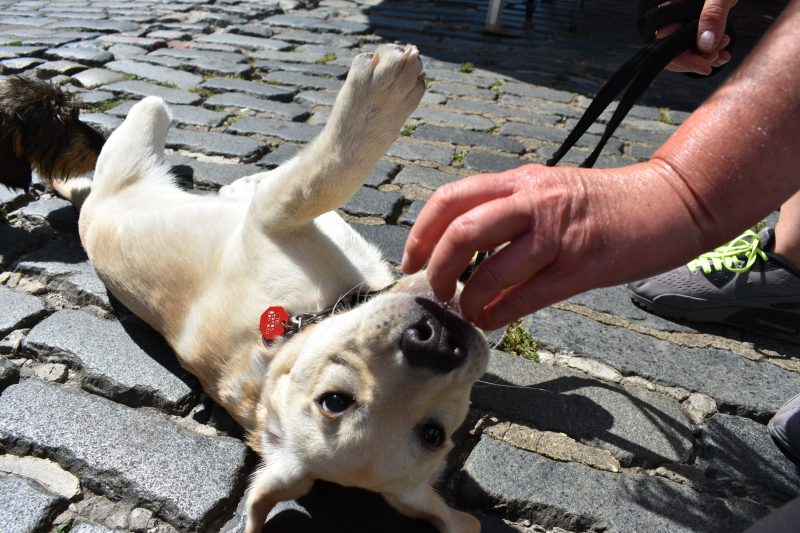 Pip and Aussie’s owners both live in Faversham. Pip is a four-year-old Yorkshire Terrier cross, with a bit of poodle and Shi Tzu. He’s ball mad, loves running and has a big personality. He’s no pushover and is definitely in charge. Aussie is a four-month-old full Labrador in training with the charity Canine Partners to be an assistance dog for a wheelchair user, helping with a host of everyday tasks such as getting dressed, taking the washing out of the washing machine and putting food away in the fridge 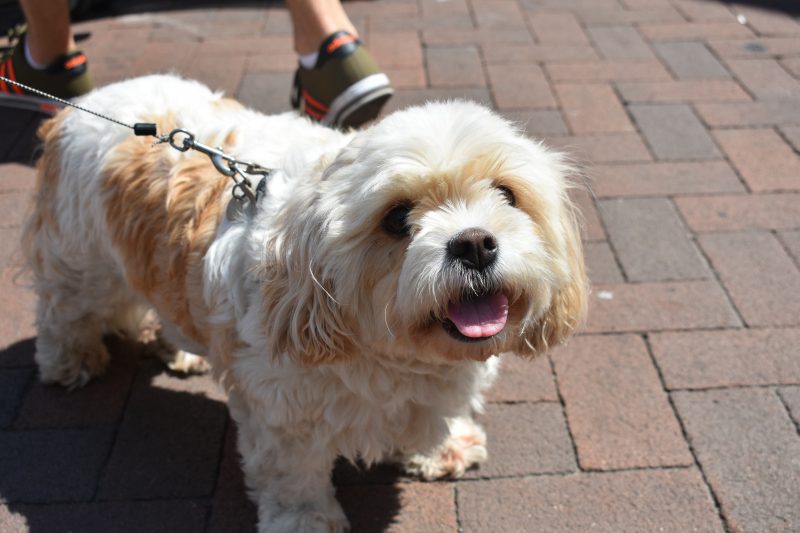 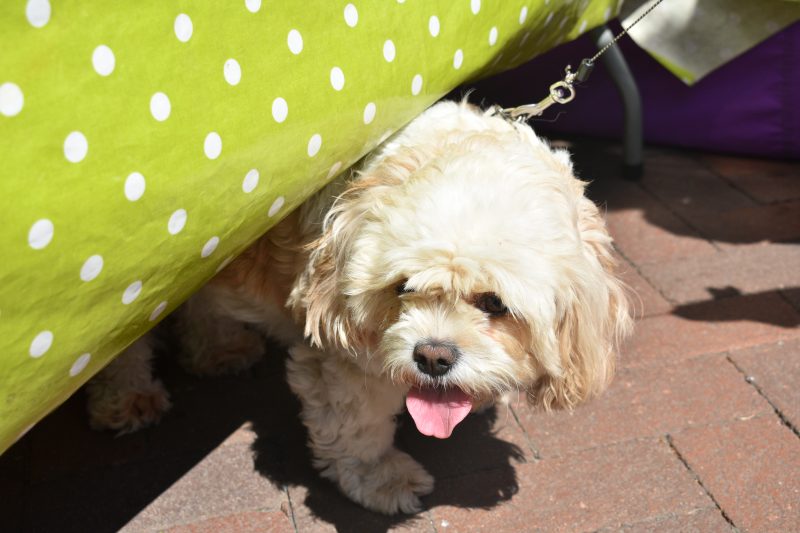 Cindy is a Cavachon – a cross between a Cavalier King Charles and a Bichon Frise. She will be four in a few weeks. Her owner, Pam Barrow, lived for 52 years in the Brents and is now in Aylesham. She has come to the market with her friend Shirley Speed who has lived here since her schooldays. ‘Cindy’s an easy dog, although a bit wilful, and a great companion,’ says Pam. ‘She’ll do anything for food. If I can’t find her, I only have to go to the biscuit barrel and she’s there at once.’ 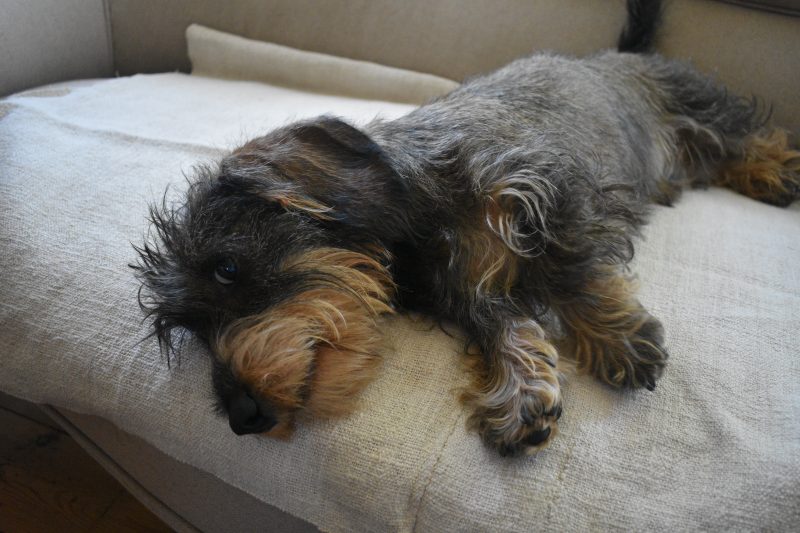 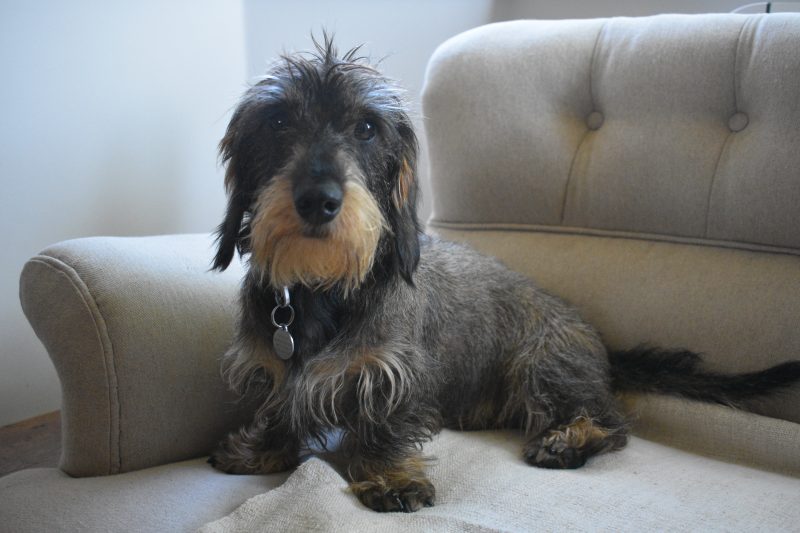 Last but far from least is the author’s Miniature Wirehaired Dachshund, Harold, 16 months old and typical of the breed – contra suggestible, wilful, stubborn and prone to paradoxical behaviour. He also loves people and most dogs, is clever, has boundless energy and is devoted to his owner, family and friends. He is a great favourite in Faversham where many people know him by name. In these photos, Harold is back home, relaxing on his favourite sofa after a busy photo shoot in the Market Place

Ruby can be contacted for photographic dog portraits at rubyredmond98@gmail.com