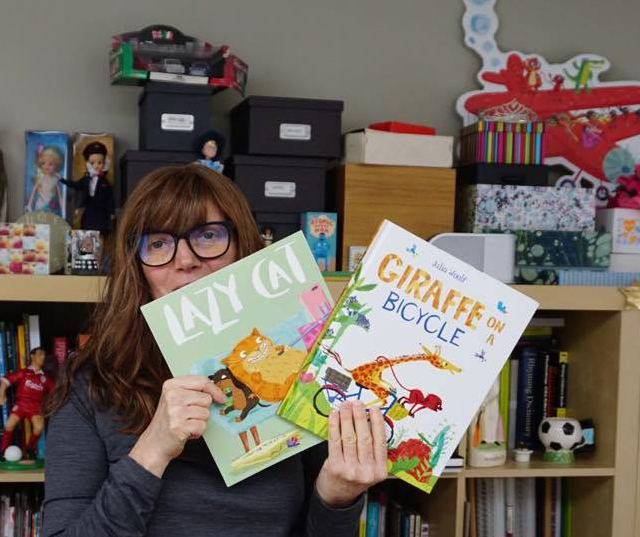 Julia Woolf and her books

Julia Woolf is an author and illustrator of children’s books, now of Faversham, late of Hollywood. To interview her is to be swept along in the colourful rush of energy and hilarity that characterises her work as she flings around ideas and future projects. As we talk, she extemporises new capers for her characters, Lazy Cat and his busy, furry-eared friend, Doodle, shrieking with laughter as she elaborates.

Julia has written and illustrated Giraffe on a Bicycle, published by Macmillan in 2016, Lazy Cat, published by Templar in 2017 and Faber & Faber is publishing Not Yet Zebra next February, illustrated by Julia and written by Lou Kuenzler. Julia and Lou will be launching their book at the first Faversham Literary Festival in February 2018. 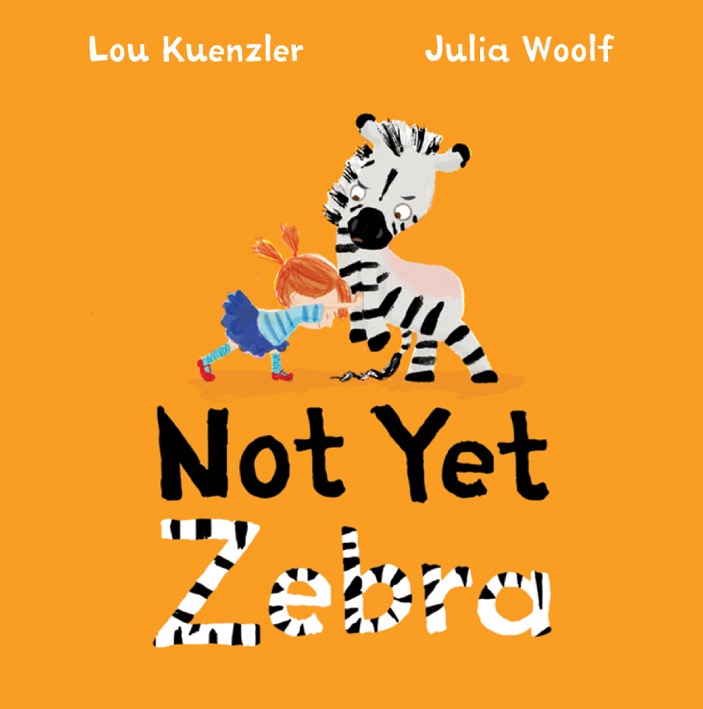 Not Yet Zebra, by Julia Woolf and Laura Kuenzler, coming out in early 2018

It is very likely that you will already have seen Julia’s work at the cinema without knowing it. Before returning to Kent where she grew up, and moving to Faversham with her husband Sim and her daughter Elsie, Julia worked for 20 years in animation, 12 of those on feature films in the United States.

The trajectory was this. After Art College in Canterbury, Julia started working on animation for commercials. She was soon snapped up by Spielberg’s West London studio, Amblimation, and then relocated to DreamWorks in Los Angeles where she spent the next 12 years. The crazy jungle scene in the film Madagascar was Julia’s work and she worked on Shrek 1 and 2. Her last job with DreamWorks was as sequence designer for Flushed Away. Then Elsie came along and Julia decided to move into illustration so she could spend more time at home with her child. 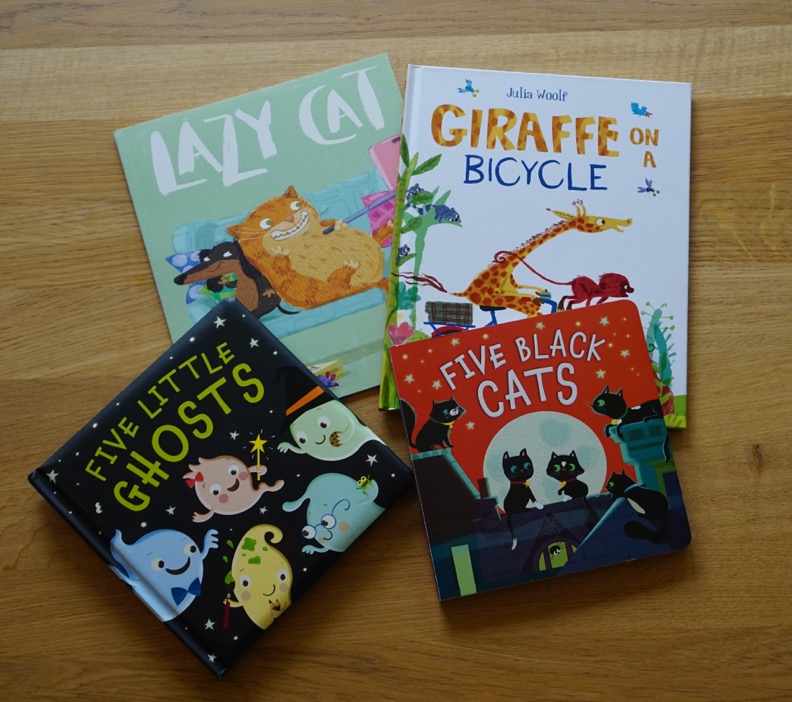 Work soon came in for illustrating educational literature. Julia says: ‘The pay was OK but it was so demoralising. I knew I wasn’t being as creative as I could be.’ When she moved back to the UK, she did a few children’s board books – ‘But I still wanted to feel more of my hand in my work.’

Julia’s illustrations are created initially in black and white . . . 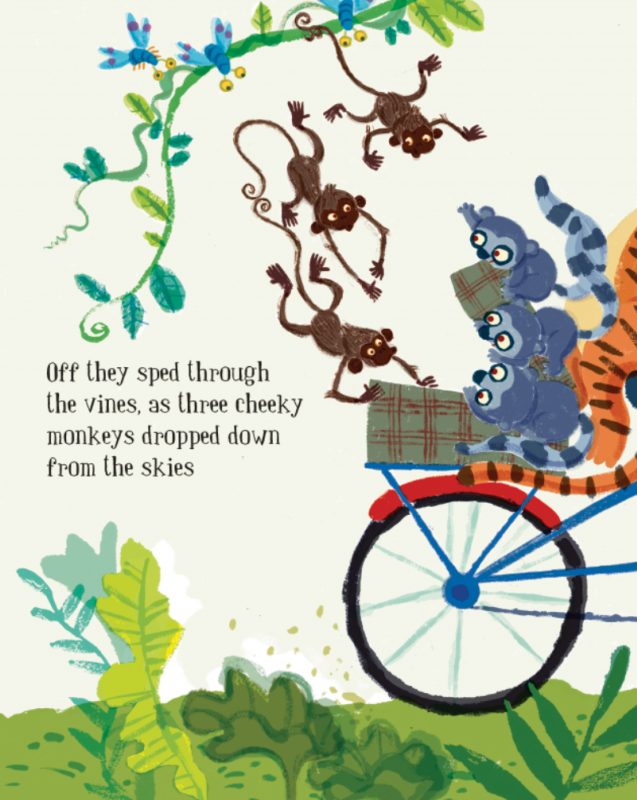 Julia says: ‘I couldn’t have done the course without the High Speed train. One day a week, I got up at ten to five, caught the train to St Pancras, at some point watched the sun come up, crossed over to King’s Cross and met a group of friends who were also doing the MA, and we got the train together to Cambridge.’

Writing is a notoriously solitary life. Julia says: ‘I miss the studio environment of my days in animation, and working in a team. You pick up so much stuff from other people’s ideas and reactions – I always think when you redo something, it gets better. It’s true I miss that but I love doing my stuff, not just being a cog in a huge creation.’ 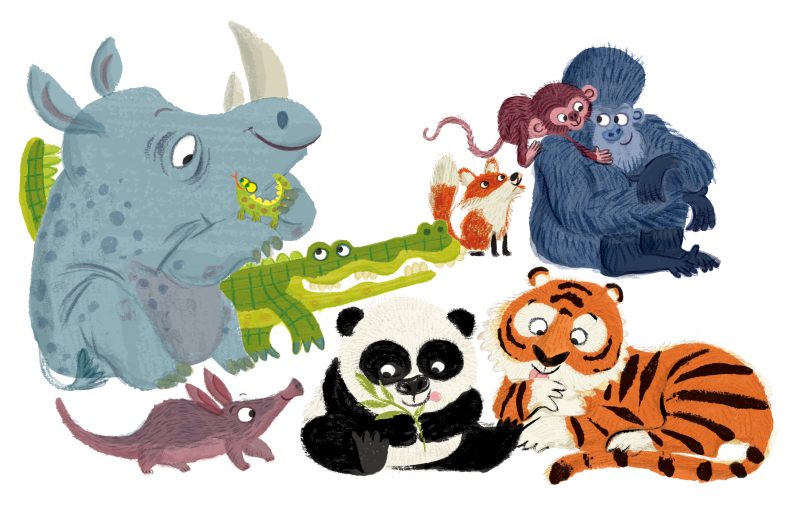 Julia used her experience in animation to promote her first book, making a short film as a trailer for Giraffe on a Bicycle. ‘It was something I thought of almost right from the start, when I first had the idea for the book.’ Julia did the artwork and her husband, Sim Evans-Jones, who fortunately is a film editor (he has edited Shrek, the Narnia films and Shaun the Sheep among others, and is currently working with Nick Park at Aardman on his latest film, Early Man) and an animator friend, Uli Mayer, put them together as an animation. Julia says: ‘It amazes me how just three of us have made this trailer, because 20 years ago it probably would have taken about 20 people to make it.’

Julia’s background in animation has certainly influenced her approach to writing and illustrating books: ‘I tend to think of each spread as a scene for a film.’ The art of illustration is (to an ignoramus and luddite like me) surprisingly technical, with much work done on the computer.

I asked Julia about her favourite book illustrators and influences. She showed me the Czech artist Miroslav Sasek who illustrated the This is . . . series of children’s books about capital cities in the 1950s and 1960s. She also showed me a book of illustrations by Mary Blair, who was a visual development artist for Walt Disney, working on the films of Cinderella, Peter Pan and Alice in Wonderland.

Julia will be launching her new book and talking about future projects at the Faversham Literary Festival which is happening for the first time next year from 23-25 February 2018. Signed copies of her books are available from 19. Preston in Faversham, as well as all the usual outlets. 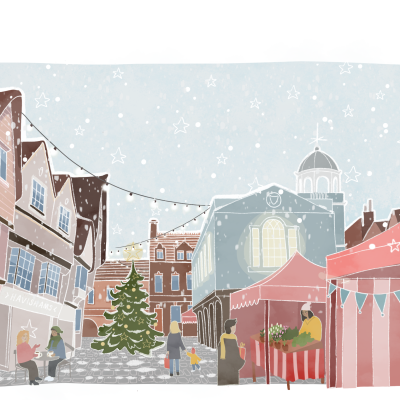 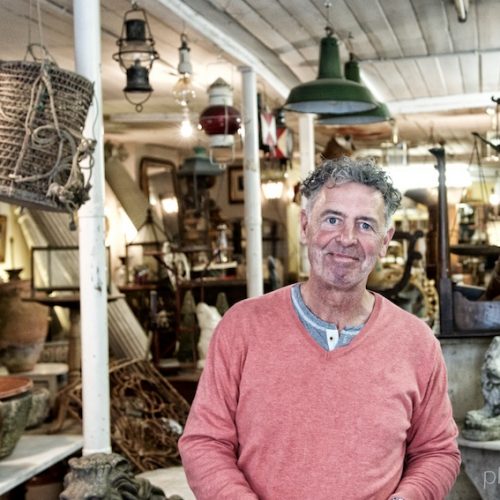