Faversham Life discovers horticultural splendour, dramatic yews and moments for reflection and repose in a ten-acre garden 15 minutes from Faversham 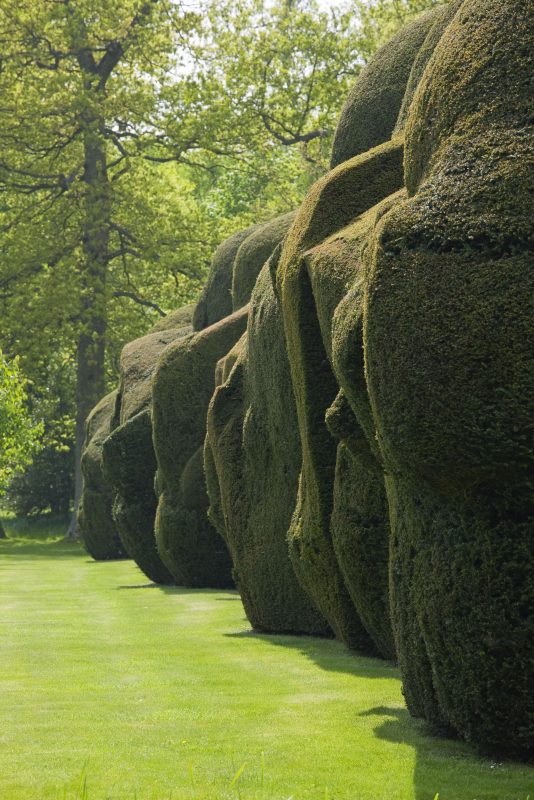 Doddington Place Gardens opens on Sunday, April 1, and will be open until the end of September every Wednesday, Sunday and Bank Holiday Monday from 11am to 5pm. Each time you visit, you will agree with A N Wilson’s comment in the Evening Standard, that it is ‘Sublime!’ 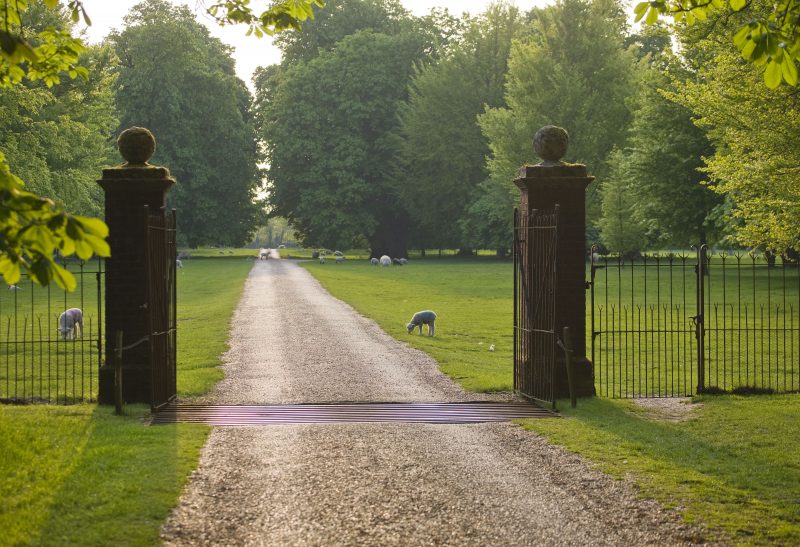 Doddington Place Gardens: view through the gate to the park © Clive Nichols

It is 15 minutes drive from Faversham. Before you come into Doddington village proper, you will see the brown signpost to Doddington Place. You take a right turn up Church Hill and, just past the gruesomely-named Church of the Beheading of St John the Baptist and opposite a cherry orchard, you come to the gate to Doddington Place. There is a mock Tudor lodge with a red brick garden wall that still shows the graffiti scratched into it in the 1940s by lovers who whispered in its shade. The long drive, lined with handsome horse chestnuts, takes you up through parkland to the ten-acre garden. 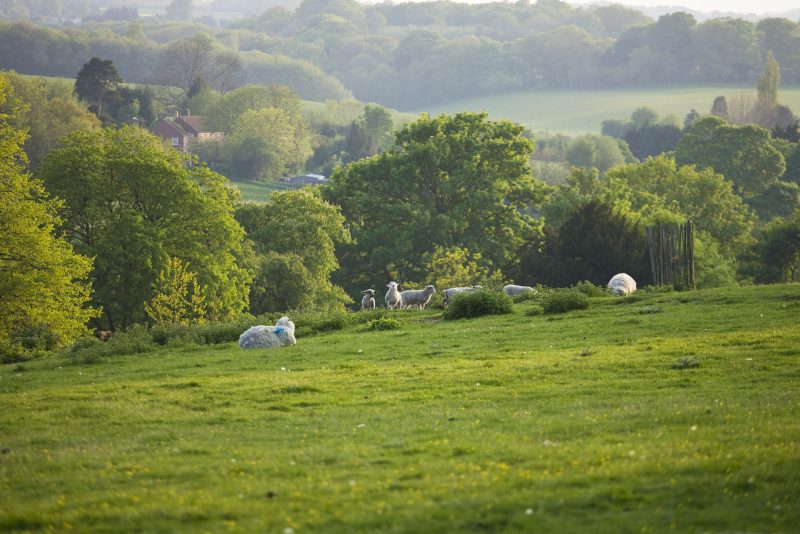 Sheep in the park © Clive Nichols

The setting is magnificent. The garden looks southwards over the Syndale valley. You see trees, tumbling valley slopes and sky. There’s not a sign of a living soul, unless a dog walker ambles across the park. The position of Doddington Place, built in the 19th century, was chosen for its view. Indeed it is said that the Crofts (famous for port and sherry) who built the house, demolished a fine ancient house further down the hill, so they should have the view entirely to themselves. 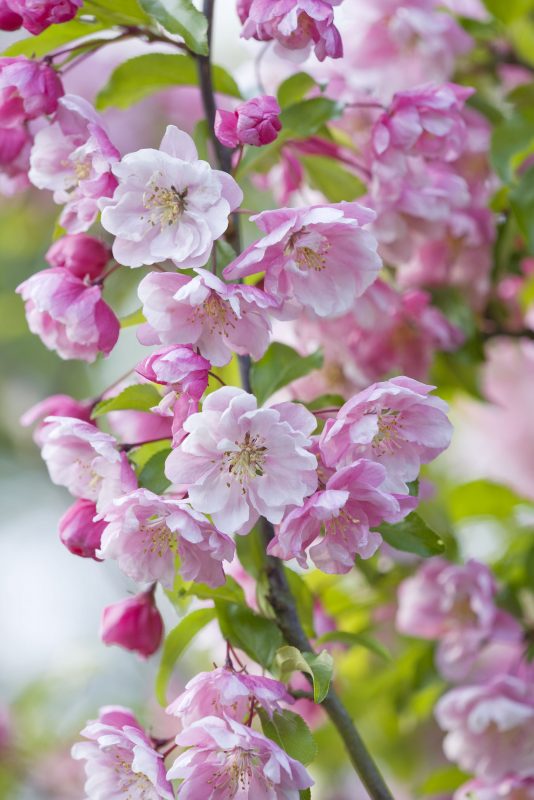 It is certainly worth buying a season ticket (see the website for details) as there is much to enjoy in the garden from spring to autumn. Early in the season, there is the glorious technicolor display in the Woodland where towering scarlet rhododendrons compete with brilliant pink camellias. The late summer sees the prairie-planted Sunk Garden in full sail. In February, the garden opens for the National Garden Scheme Snowdrop Day where snowdrops glitter at the feet of the lofty Wellingtonias, planted when Queen Victoria had just lost the Prince Consort and had another 40 years to reign in her black weeds. 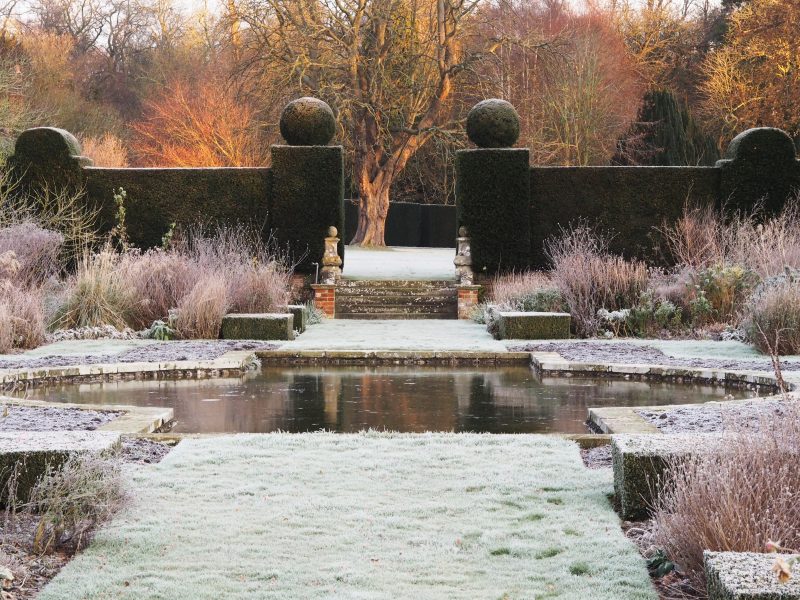 A frost in the Sunk Garden at Doddington Place. In the winter and spring, you see the Edwardian structure © The Middle-sized Garden 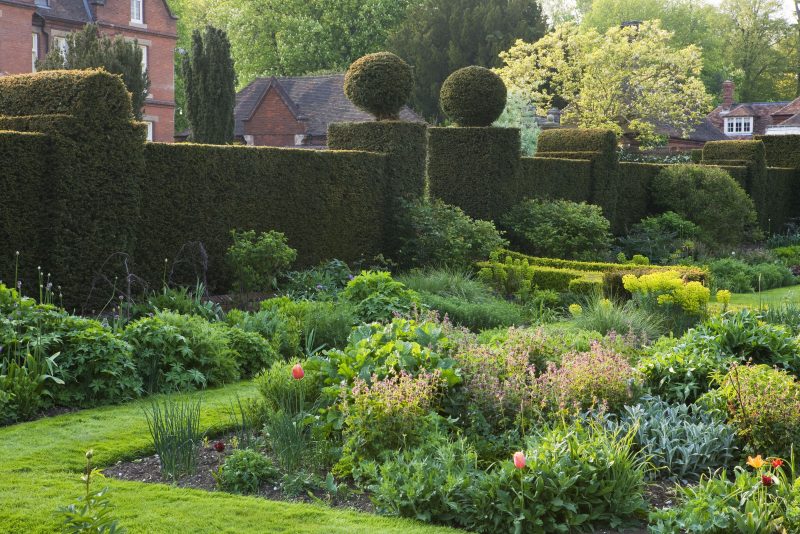 Doddington Place was built around 1870. The original garden, composed only of a terrace around the house, was designed by Markham Nesfield (1841-1874) ‘who briefly enjoyed the largest reputation of any designer of his generation’. The 1873 design, still in the possession of the present owners, Richard and Amicia Oldfield, was one of his last works as he died in his early 30s, thrown from his horse or falling off his bicycle (history is hazy) near Hanover Gate by Regents Park. His work was largely in the formal style. William Robinson was yet to publish in 1883 The English Flower Garden, which was to stimulate the great debate of the formal versus the naturalistic in gardening. The brick terrace Nesfield designed stands today but the parterres he described, which would be so fashionable now, were never made. 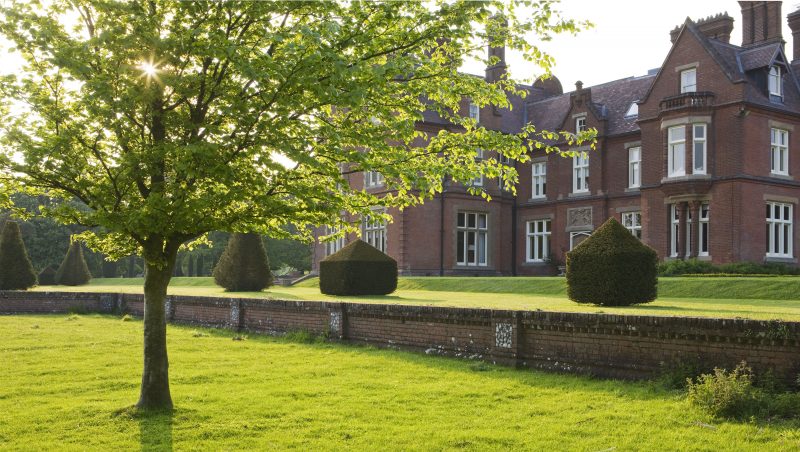 The Markham Nesfield terrace, designed in 1873 just before he died © Clive Nichols

The house, standing on its terrace in parkland was sold in 1906 to Mr and Mrs Douglas Jeffreys (Aunt Maud, née Oldfield, to the present incumbents). With alacrity, Aunt Maud set about extending the gardens and in 1909, the garden architect John Duke Coleridge produced a design which extended the garden into the park. The existing structure of the garden – the Sunk Garden, the Rock Garden and the yew hedges – is essentially Edwardian and dates from this time. 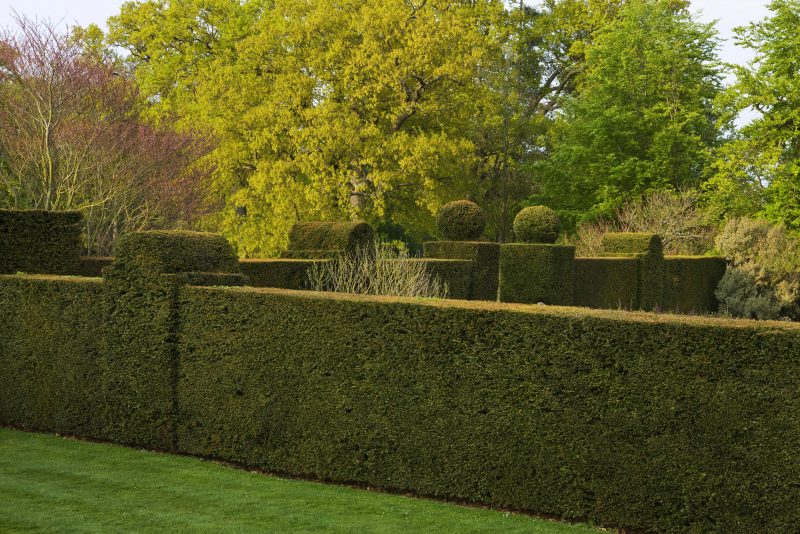 There is an exciting dichotomy between this existing structure and the imaginative planting which is happening under the present Oldfields. The Sunk Garden is a case in point. 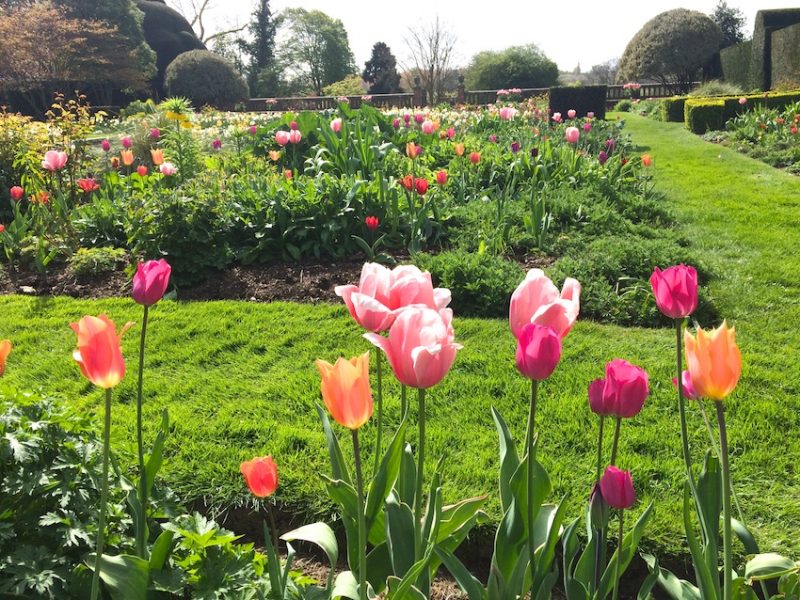 Seven years ago, garden designer Kirsty Knight-Bruce redesigned the Sunk Garden. It was already charming in a slightly stolid way with lawns, yew pyramids cornering the Edwardian lily pond and flower beds obediently clinging to the yew hedges around the edge. Kirsty removed the yew pyramids and the hedge around the curved wall leading to the Opera Lawn and light flooded in. She added further borders around the pond and in the lawn, influenced by the original Coleridge design. In structure, she stuck with the Edwardian. The planting was far from it. The planting is soft, high and airily transparent using plants like Stipa gigantea, sanguisorba, Cephalaria gigantea so that by the summer, it is taller than you as you wander through. It is a stunning use of a classic Edwardian structure softened with naturalistic planting influenced by gardeners such as Piet Oudolf of the New Perennial Movement. Much admired by visitors are the borders of white Cosmos ‘Purity’ around the pond which buzz with bees and are a spectacular white froth until the autumn. 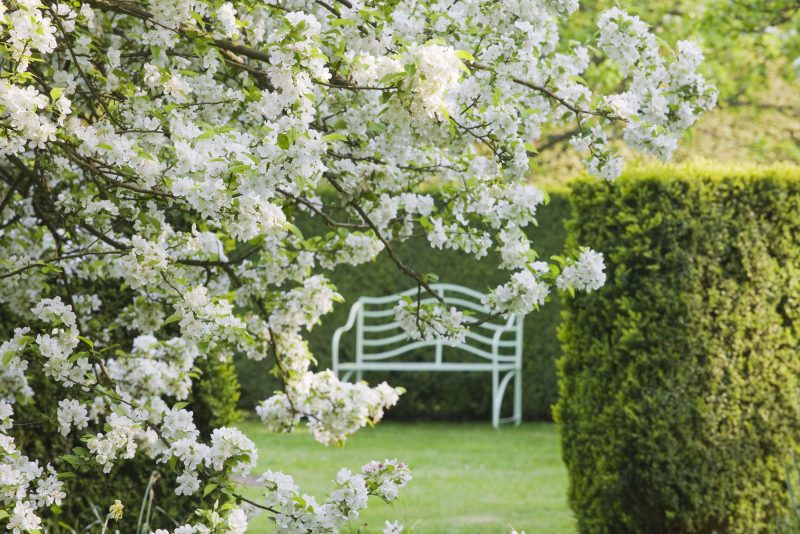 Amicia Oldfield says: ‘The height and softness of this garden now balances the house which before, had a tendency to dominate the garden with its solidity and bulk.’

As you move out of the brightness and vivacity of the Sunk Garden, you move into the repose of the ethereal Silver Ghost Border which has many rare silver-leaved plants and flowers in whites and gentle pastel shades. This is the work of Amicia and head gardener Lucy Adams and was inspired by a fashion which arose during the Great War. Amicia says: ‘Because of the number who died in the first World War, there was a surge of interest in clairvoyance and continuing presence after death and this was reflected in gardening.’ 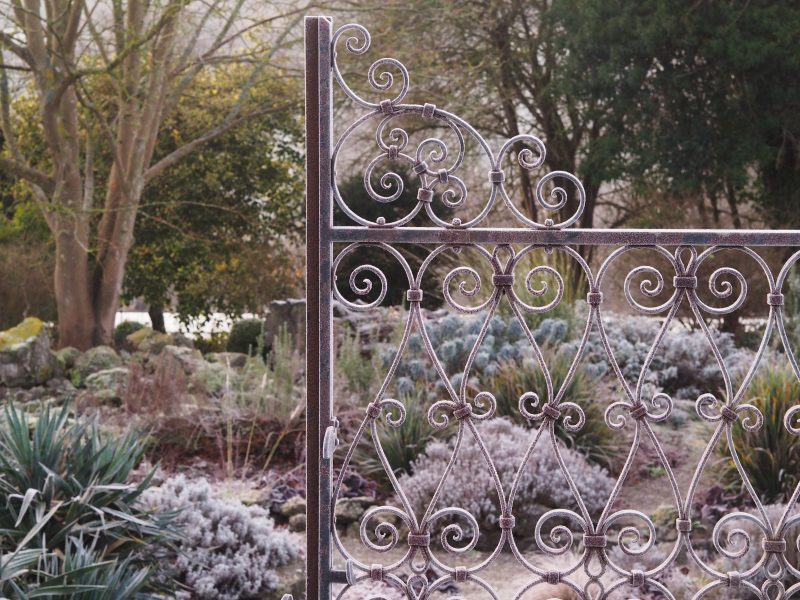 Stepping up to a terrace with the dogs’ graves on your left, pause at the iron gate and look at the view before descending the brick steps into the Rock Garden, gently spilling down into the valley with its series of descending pools. 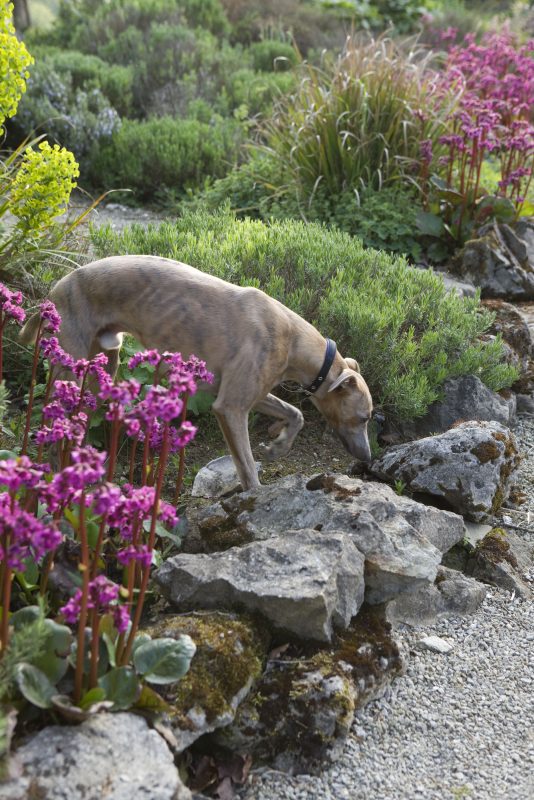 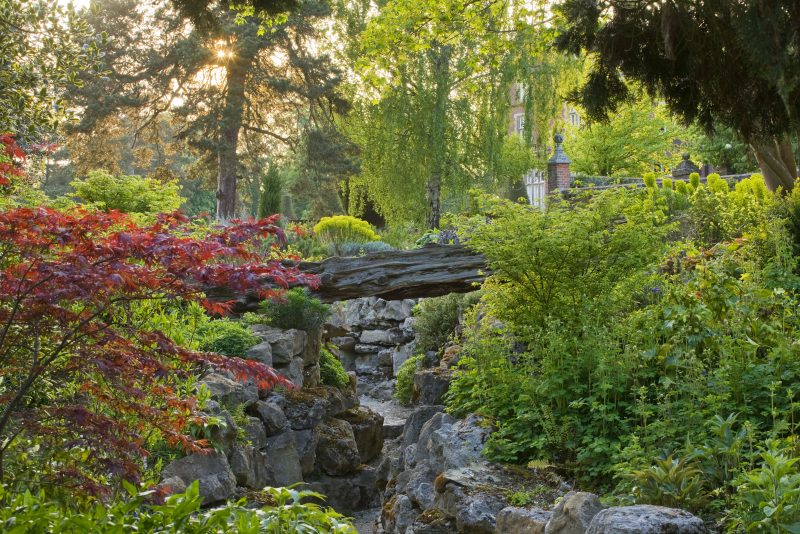 The Rock Garden was re-created and replanted about ten years ago by Matt Jackson, the rock-climbing head gardener of the time who had previously created the Quarry Garden at Scotney Castle. There are no records of the original design but we know Doddington’s Rock Garden was made in the early 20th century. By the turn of the 21st century, the original conifers were looming darkly, wreathed with pink everlasting sweetpea and most of the rocks had vanished into the undergrowth. It had charm, but of the Sleeping Beauty variety. Now, there are drifts of small wild tulips and narcissi early in the year, unusual evergreens, the Edwardian iris bed in May to June, the swishing grasses, and the vivid red leaves of euonymus and acers as autumn comes. 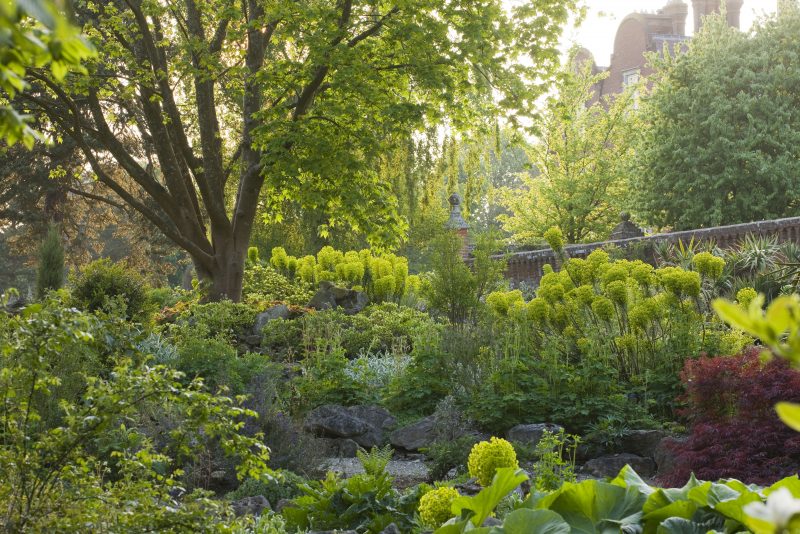 Moving back towards the house, I ask head gardener Lucy what to look out for this year. She highlights the extravagant flowering of the Viburnum opulus in the Dahlia Garden, and its dahlias which are changed every few years. This year, we will see the varieties, ‘April Heather’, ‘Mel’s Orange Marmalade’, ‘Clair de Lune’ and ‘Pam Howden’ in a citrussy colour scheme. This small formal garden at the top of the Silver Ghost Border is protected from the worst of the weather and will host some exotic planting: Begonia luxurians, Ricinus communis and Salvia convertiflora. 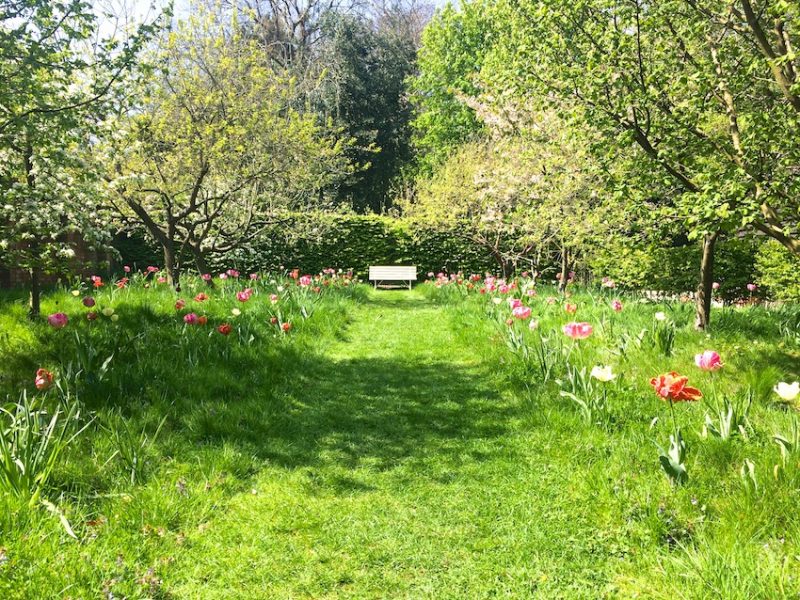 Finding repose in an orchard with tulips © Lisa Valder

Lucy also points us towards the Coach House borders skirting the tearoom where the peonies, ‘Coral Charm’ and ‘Coral Sunset’, recently developed hybrids, will be flowering for their second year.

Turning your back on the valley and walking north, you come to the imposing Wellingtonia Walk, undoubtedly planted contemporaneously with the building of the house, so now almost 150 years old. These giant redwoods were a great show-off gardening fashion when they were first introduced to the UK by plantsman William Lobb in 1853 and, disregarding their provenance, promptly renamed after the much-adored Duke of Wellington. 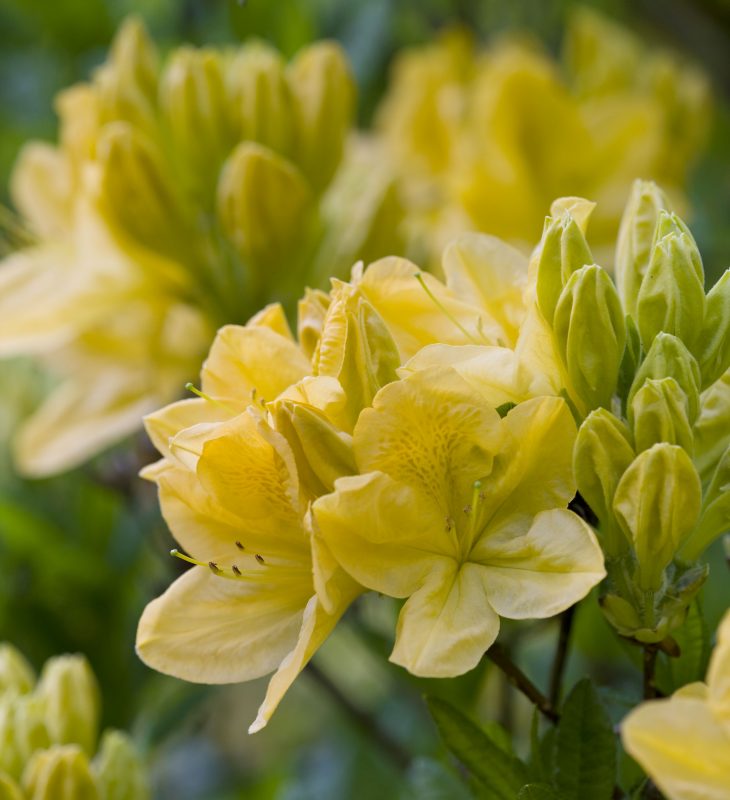 Azalea in the Woodland © Clive Nichols 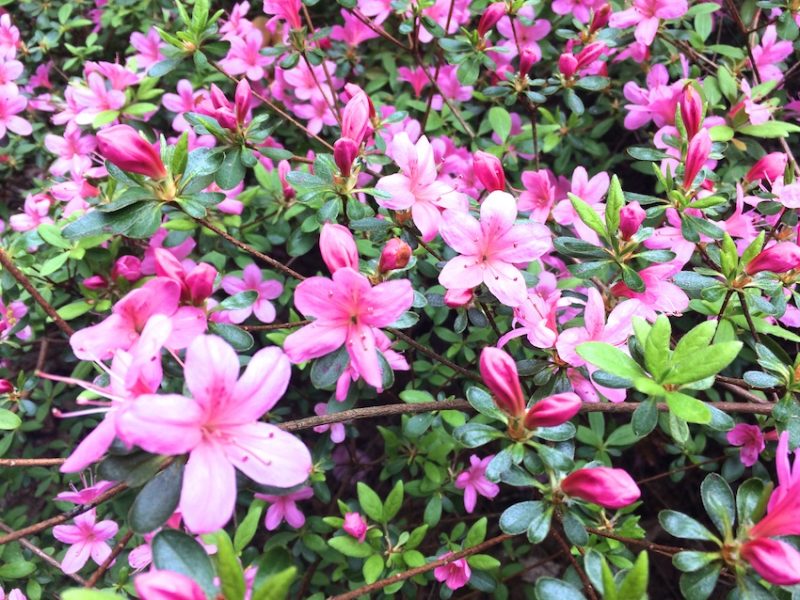 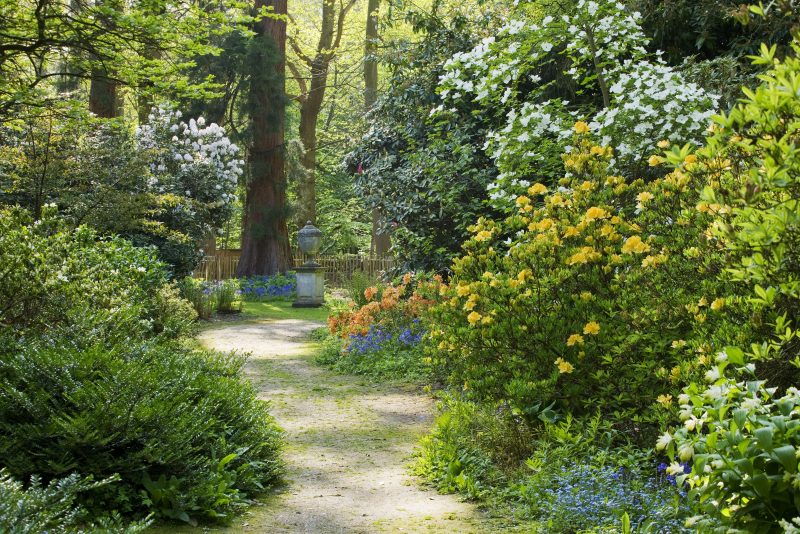 A Woodand path leading to the Wellingtonia Walk © Clive Nichols

Initially, the avenue led nowhere but in the 1960s, Jack Oldfield (Uncle Jack), a Labour MP under Ramsey MacDonald and vice-chairman of London County Council, discovered an acid seam to the east of the avenue and started planting rhododendrons, azaleas, camellias, crinodendron, enkianthus and other plants which thrive in acid conditions, to a design by Stephen Stokes, a designer related to his wife and notable for his skills in embroidery. 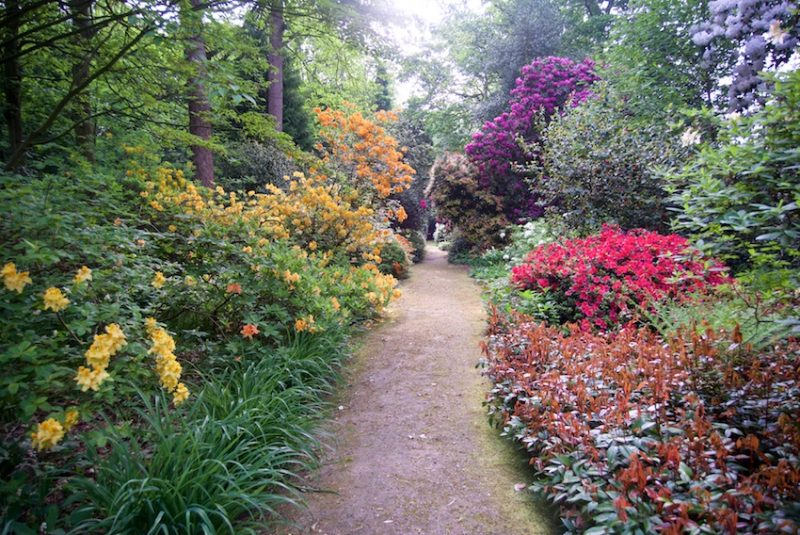 In May, the stunning oranges and scarlets vibrating furiously with shocking pinks against fringed blue conifers have an almost retro effect – the palette of 1960s Marimekko or Pucci. There are blue hydrangeas, of that clear blue only found in acid soil. 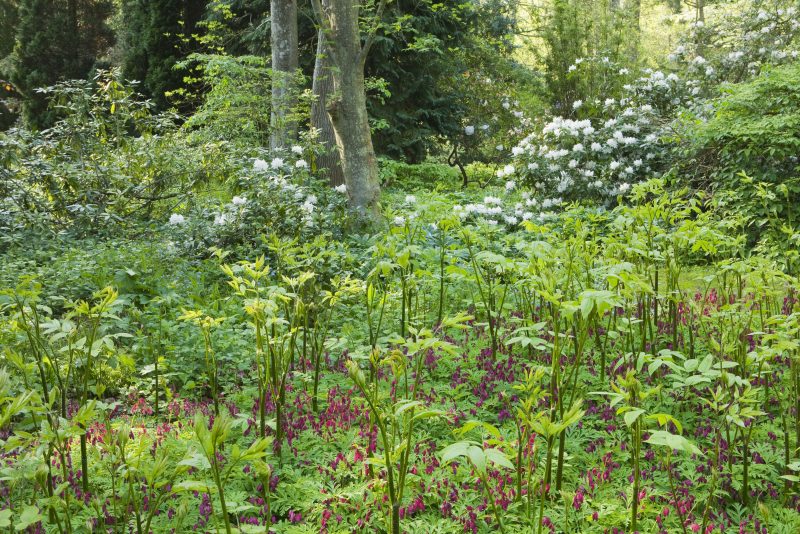 The Woodland floor is carpeted with dicentra © Clive Nichols 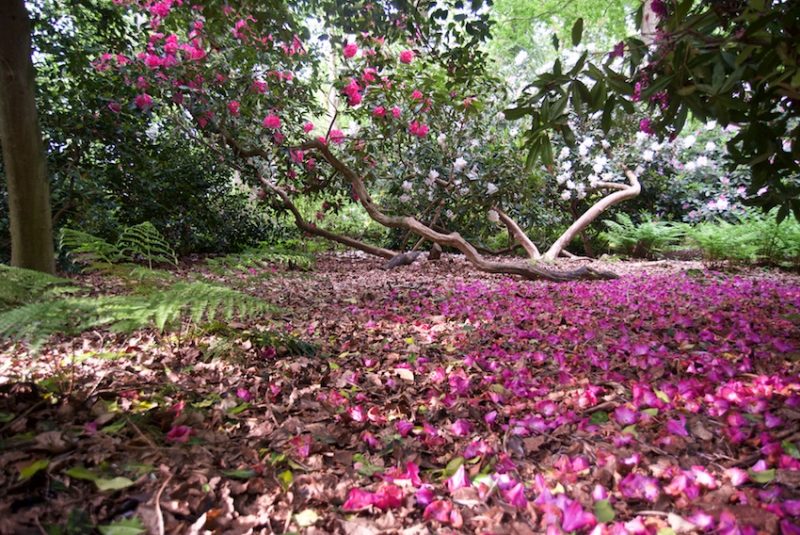 A carpet of blossoms in the woodlands ©Lisa Valder

There are calmer pleasures too – amongst them the Davidia involucrata, draped with numerous white flowers in spring giving the clue to its common name of Handkerchief Tree, the Cornus ‘Eddie’s White Wonder’ exuberantly studded with white flowers, the elegant Cercidiphyllum whose autumn leaves smell of burnt sugar and turn orange, yellow and pink as they fall, and the enormous old beech tree. Beneath the trees are hellebores, primulas, cyclamen, dicentra. 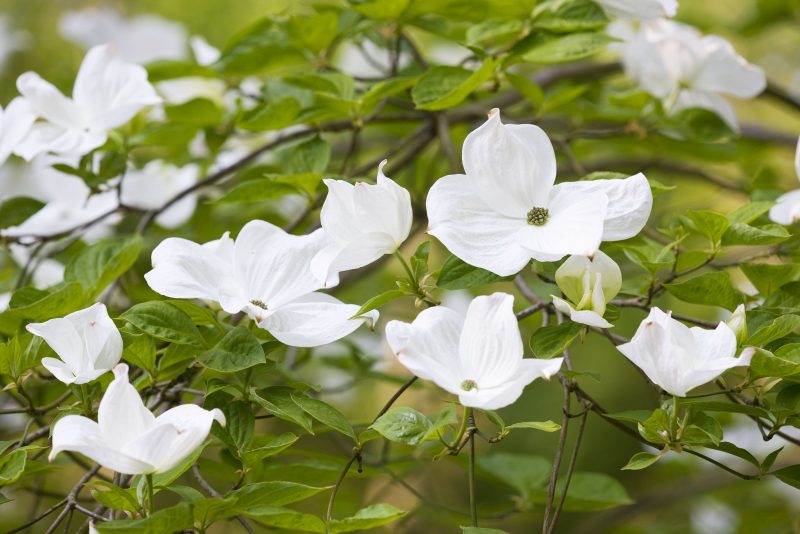 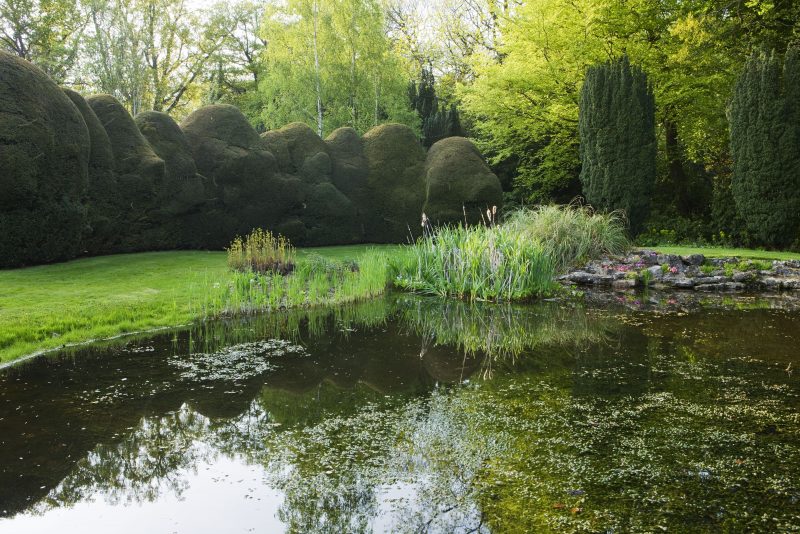 A scene of orgiastic frenzy in spring © Clive Nichols 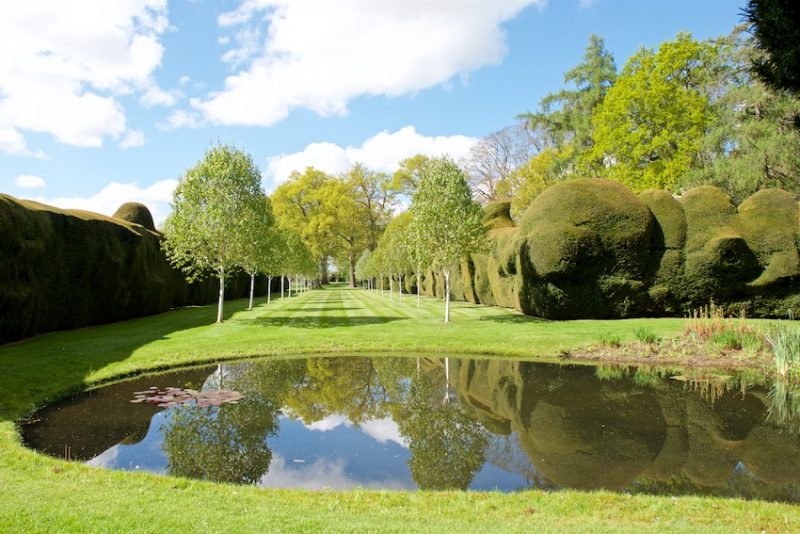 The birch walk seen from the woodland pond ©Lisa Valder

Or along the edge of the park from the gothic folly built in memory of Alexandra, Richard Oldfield’s first wife. The third way back is through the Spring Garden with its blossoming trees and camassias pushing up through the long grass, and the glinting glass obelisk. 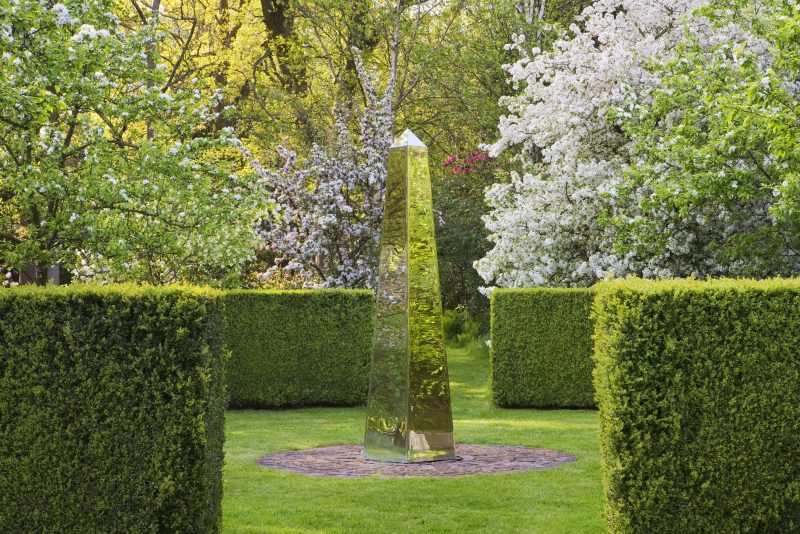 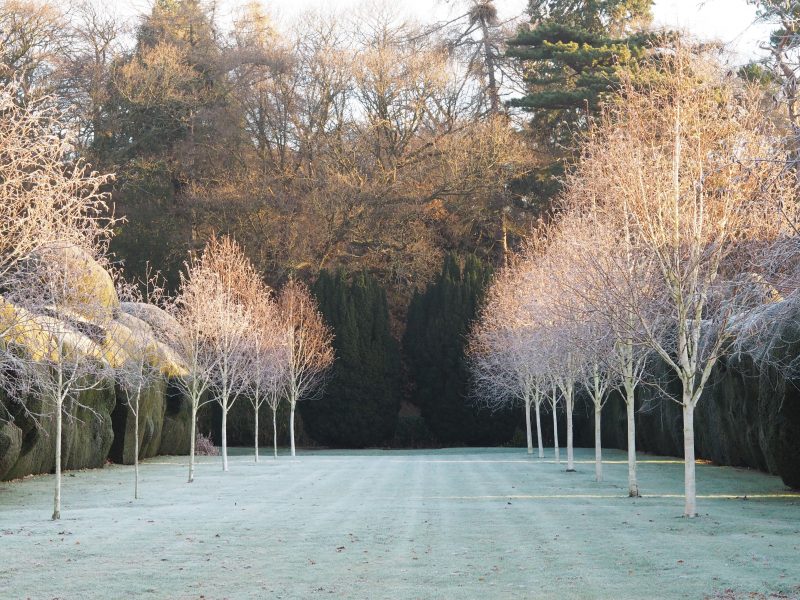 And everywhere are the massive reposeful yew hedges, about a mile of them. Planted formally in the early 20th century, then left to form themselves as heavy snowfall in the 1930s pushed them out of shape, and gardeners to clip them became scarcer, the yew hedges now take strange forms – mountain ranges, jutting brows, slumberous dogs. In places, you can creep in to view their cavernous interiors. 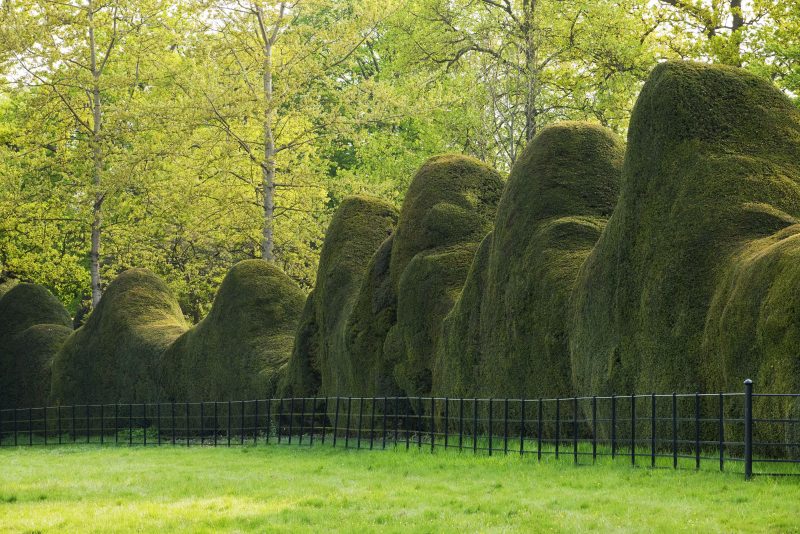 Clipped each year on a cherry picker, the yews dictate their own forms © Clive Nichols

Busloads of Dutch and German garden tourists arrive throughout the season, many returning for a second or third time. How lucky we are in Faversham to have this garden on our doorstep, to be enchanted and inspired by its imaginative and innovative planting schemes or merely to enjoy the repose of the sweeping lawns and stately trees.