Sarah Langton-Lockton, writer for Faversham Life, is stepping aside 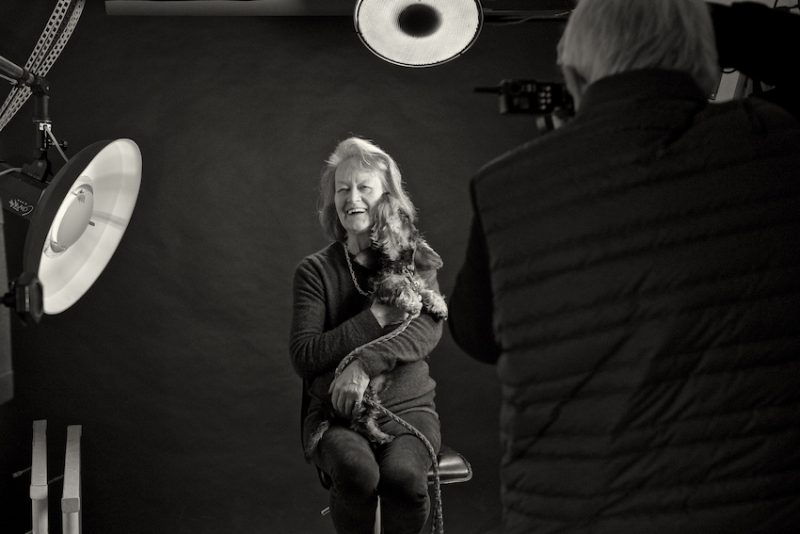 Sarah and Harold, photographed by Peter Smith, who is being interviewed by Sarah

Sarah Langton-Lockton arrived in Faversham on 8 November 2013 with no connections, history or association with the town. She was 71, tired of London (though emphatically not of life), and had found a fine early 20th-century villa in Athelstan Rd.

Only a week passed before the builders moved in and the process of exquisite renovation which was to last five months began. If Sarah was daunted, she was soon delighted by the town she had chosen. ‘When I arrived, all my neighbours introduced themselves. There was a power cut, and I was brought tealights, followed shortly by a bottle of wine. In Faversham, I found the country manners of 50 years ago. The concept of neighbourliness is alive and well.’

Three years later, she was at coffee in The Yard with friends Amicia de Moubray and Romy de Gelsey. It was a Saturday morning in the spring and they were still enchanted by the music they had just heard at The Assembly Rooms. At this meeting, Faversham Life was born, although memories are hazy as to who exactly proposed the idea.The online magazine was launched in the autumn and its growing list of subscribers was soon charmed by Sarah’s elegant writing and her insightful interviews.

Sarah is now a familiar figure in Faversham market on Saturdays with her beetle-browed, wire-haired dachshund Harold trotting at her heels and enthusiastically greeting his many friends. Sarah says: ‘Harold of course has a colossal fan club in Faversham because he’s such a dear little dog. I meet people and they say in reverent tones: “Is this the famous Harold?”’ Sarah’s feature on Faversham’s dogs has proved one of the most enduringly popular Faversham Life features. She says: ‘Shopping can take ages because one meets so many friends. I think my longest trip to the market was five hours.’ Sarah believes that her involvement in Faversham Life ‘brought new friendships and a new sense of home’.

Of writing for Faversham Life, she says: ‘I have been principally a feature writer but it is the interviews that I have most enjoyed. It’s a lovely process to gain trust and just hold a conversation about things the interviewee deeply cares about. Part of the delight is interviewing people who aren’t professional interviewees; to interview people who have a vocation – something they do because they are driven to do it, not for celebrity or financial gain. 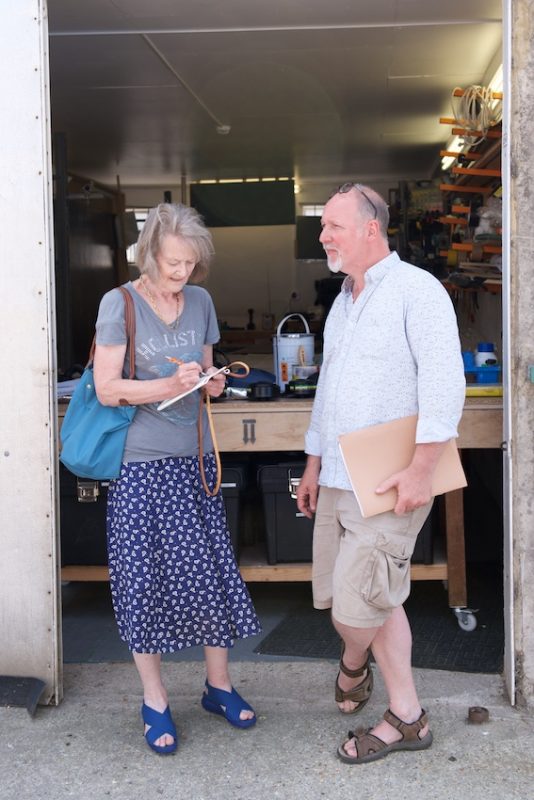 ‘Faversham is a hotbed of entrepreneurs, particularly aged in their 30s and 40s,’ says Sarah. Looking back over her many interviews for Faversham Life, Sarah mentions our web designer Neil Brown, whose interview revealed a skateboarder who discovered the visual arts. She says how much she admires the creativity of Chris and David at Edibleculture: ‘They have remained committed to their ideals but with a sustainable business plan.’

She thinks of Claire Raraty-Squires who moved the village stores that were part of The Sondes Tea House outside when lockdown was imposed, and an early interview with James Thorn of Wild Bread, who responded to the lockdown by organising deliveries. ‘These people have found ingenious ways of staying in business, and at the same time doing something for the community. It’s that which is so special about Faversham.’

Sarah says: ‘Journalists love finding out about things and sharing them.’ Before Faversham Life, writing had featured largely in her working life, although she didn’t learn to read until she was seven. She says: ‘It was withheld from me.’ When Sarah was six, her father, who was something of an adventurer, flew to Australia with her mother, leaving Sarah and her two younger sisters to follow on by passenger liner SS Stratheden six months later. Once on board, the nanny entrusted with their care proved flighty and soon fell in love with a ship’s engineer, leaving six-year-old Sarah burdened with responsibility for her small sisters for much of the six-week voyage. Her education was delayed further on arrival in Australia when the headmaster of the local school claimed that Sarah couldn’t start in the middle of the school year. Sarah says: ‘He had already declared that we were snobs and he wouldn’t have us in his school!’ On her first day at school, Sarah learned to read before the morning was out. ‘By the time I was halfway down the page, I’d cracked the code. I went home and picked up Alice in Wonderland.’

Sarah read Modern Languages at Oxford, where she began her journalistic career writing film reviews for Isis, of which she says: The Isis is Oxford University’s leading student magazine. Founded in 1892, it has survived many vicissitudes and is the UK’s longest-running independent student magazine.’ Sarah has had a variety of jobs in her life which, she says, have all been to do with ‘sharing and communicating enthusiasms with language the instrument for understanding and knowledge’. 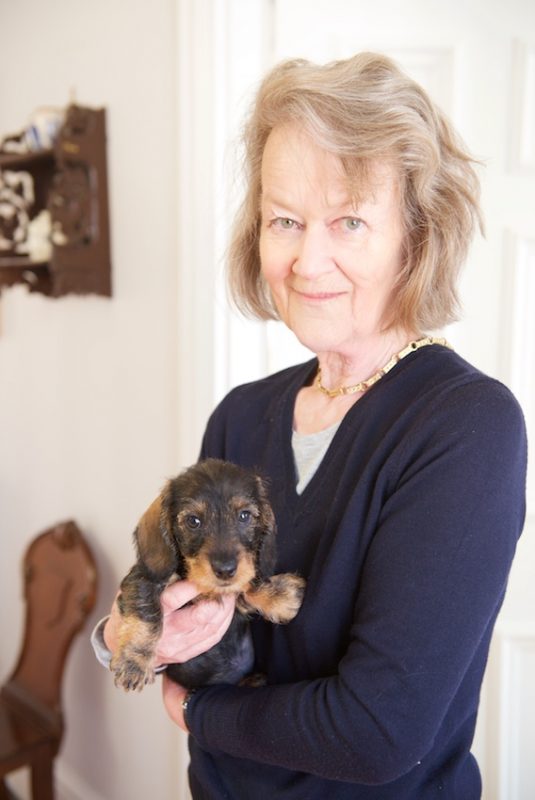 Sarah and Harold at her Faversham home

For 30 years, Sarah ran a disability charity whose philosophy was to push for inclusive design in the built environment. ‘If the built environment is designed to accommodate a wider range of people, the need for “special needs” provision is reduced. The result is buildings and places that are inclusive and more convenient for everyone.’

It was a tough job. Sarah says: ‘Running a charity is difficult – there’s always the funding disaster looming.’ She pioneered employing the unique expertise of the charity to earn money. ‘Who knew better than us about the built environment and disability so when the Disability Discrimination Act was enacted, we started offering consultancy.’

For this work, Sarah was given an OBE in 2000. On receiving the honour, she told HRH Elizabeth II that her charity had acted as consultant on the redesign of The Queen’s Gallery. Sarah remembers: ‘The Queen said, with a wicked smile, “How very useful!”’

Sarah’s passion for creating gardens and growing her own food had been intensifying through her life so when she retired in 2005, she volunteered to work at The Garden Museum in Lambeth. She says: ‘I worked on the front desk as I already had an allotment and a complicated garden, so didn’t want to volunteer for more gardening. Yet gradually, I found that visitors with gardening questions were usually being directed to me.’ The museum director, Christopher Woodward encouraged Sarah to write a piece for the museum’s journal based on her memories of her father’s farming venture to coincide with an exhibition on The Good Life. 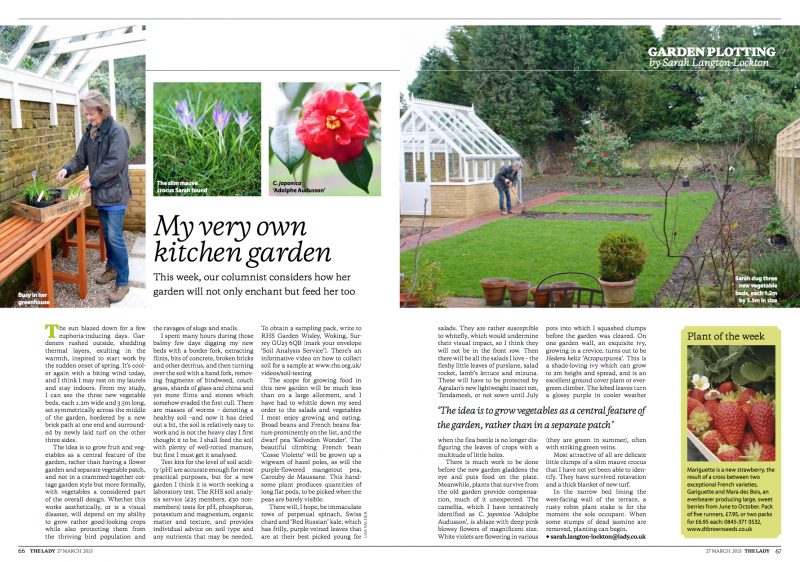 Sarah documented the design of her Faversham Garden in a weekly column in The Lady Magazine.

Then a dear university friend Charlotte Johnson Wahl, the painter and mother of PM Boris Johnson, told Sarah that her daughter Rachel Johnson, had just been appointed editor of The Lady. ‘I don’t suppose she’d like a column on allotments,’ said Sarah, half in jest. Rachel asked for a couple of example pieces and Sarah was taken on – a position which was to grow into gardening editor and outlast Rachel’s editorship. Sarah says: ‘I was an amateur gardener writing for amateur gardeners.’

Sarah Langton-Lockton OBE has accomplished much and is a cheering example of how to age thrillingly. Now 78, Sarah says of her generation of women: ‘It never occurred to us, or anyone else, that we’d be anything but wives and mothers like the generation before us.’ Yet the spirit that has driven Sarah can be glimpsed in her mother, for whom hunting with the Quorn was more important than netting a husband. Sarah says: ‘She made a deal with her parents and traded in her season for a beautiful hunter called Jubilee.’

Faversham Life’s readers will miss Sarah’s well-researched and polished features, and we will miss her meticulous and uncompromising subediting (Sarah says: ‘I once apologised to the chief sub at The Lady for being pernickety. She replied: “I like pernickety”’). But she is firm of purpose: ‘I edit myself to such a point that it drives me mad and anyway I have promised my granddaughters that I’ll write my life story.’ 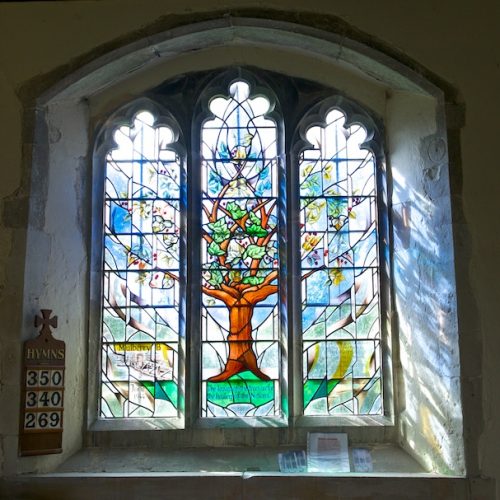