What is happening in the green tin church? Faversham Life finds out. 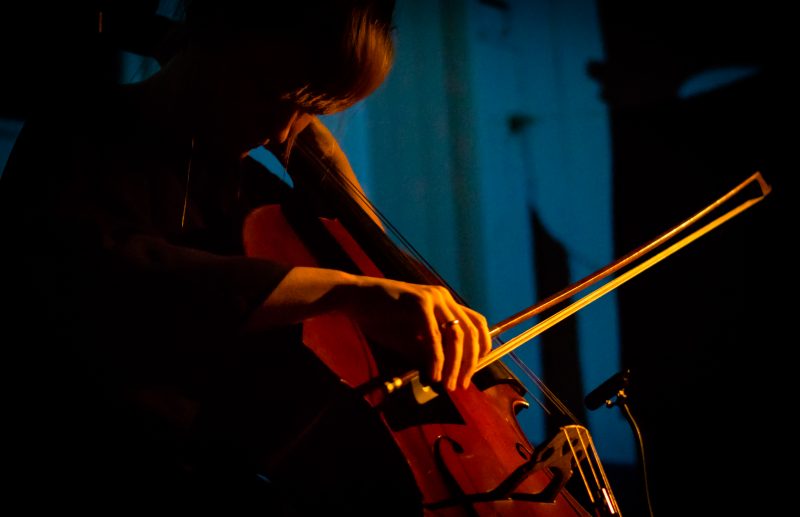 The post-classical cellist Resina plays at The Hot Tin

The green tin church (St Saviour’s) by Faversham Rec has new owners, Mike Eden and Romana Bellinger, and a new life as The Hot Tin. It is a space in which many things are happening and will happen.

I trotted along to interview them for Faversham Life and to pin them down as to what The Hot Tin is exactly. A music venue? A yoga hall? A cinema for arthouse films, documentaries, possibly a season of Bette Davies? A meeting place? An exhibition space? Yes, they said, all these and many other things, things that haven’t been thought of yet, possibilities that you, Faversham Life reader, can be involved in if you want. I felt faint as creative boundaries crumbled before me, so let’s start with the cake to fortify ourselves. 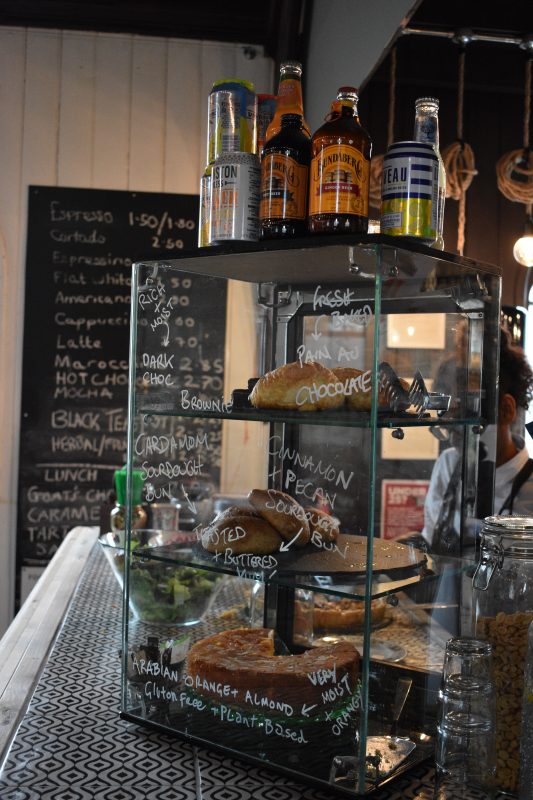 Mike and Romana have built a bar at one end of the church hall, painted in purply-black, with Nick Kenny‘s distinctive tiling and glittering with lights. There are stackable chairs, the metal-framed retro sort that were being replaced by polypropelene when I was at school, and foldable tables, so the space can be cleared . . . But cake first!

The Hot Tin is open from Tuesday to Saturday, from nine to five at present although it is fully licensed and will start opening in the evening soon. It sources locally. There are aromatic cardomom buns and cinnamon buns from Wild Bread and unctuous carrot cake and golden gluten-free orange and almond cake from Creekside Cakes. Bruno, a French patissier from Rochester, brings in fabulous creations made with chocolate ganache. The coffee is from a Canterbury firm and excellent. The Hot Tin makes a small cortado which has become my favourite version of coffee – small, strong, with milk. 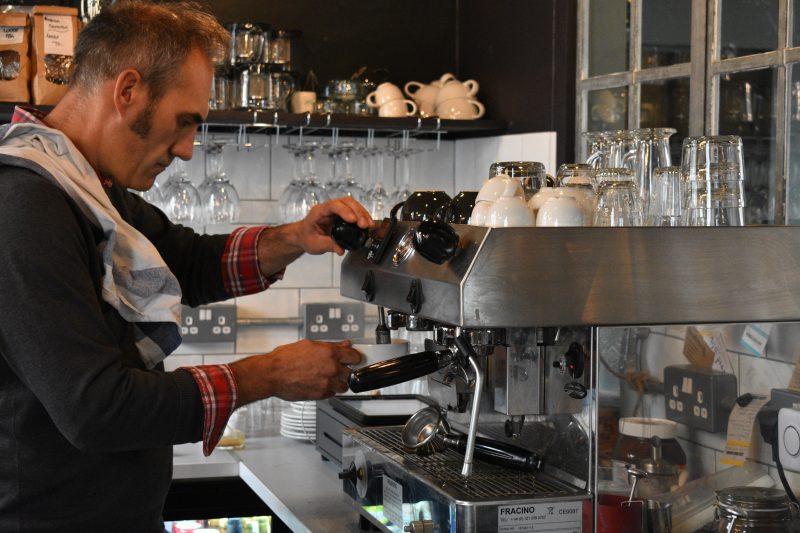 There are Kent and Brogdale ciders, Boutilliers beers and Pluckley Teas. On Saturday, Hot Tin-er William Ford makes lunch. One week, it was stuffed aubergines with sumac and a lemony lentil salad; the following week, it was garlic tart with dressed lettuce and homemade red cabbage coleslaw. The food side is growing. 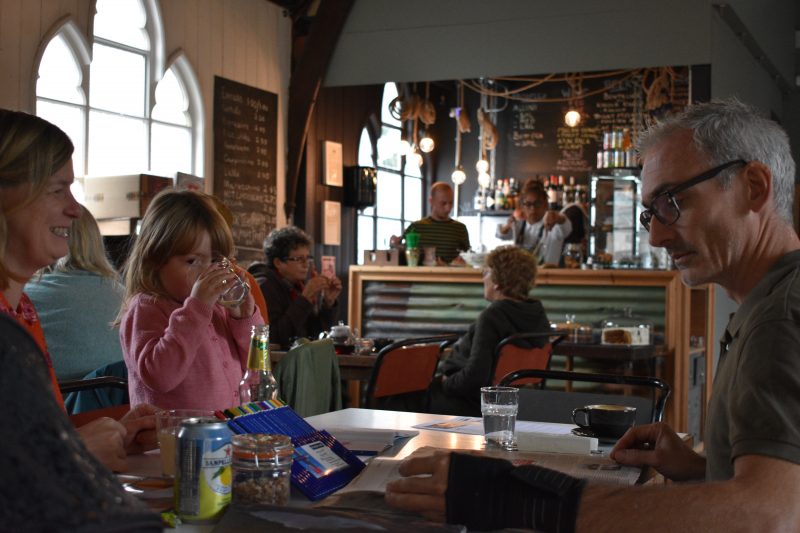 If this all seems very enticing – it is meant to be. What happens in The Hot Tin in the future will largely depend on the talents, stories and ideas of local people. Mike and Romana are establishing The Hot Tin as an arts centre and community space. Romana says: ‘We want to work with local people, bring them in and spark ideas. What we do depends on the ideas people come up with. Then we can put them together and facilitate it.’ 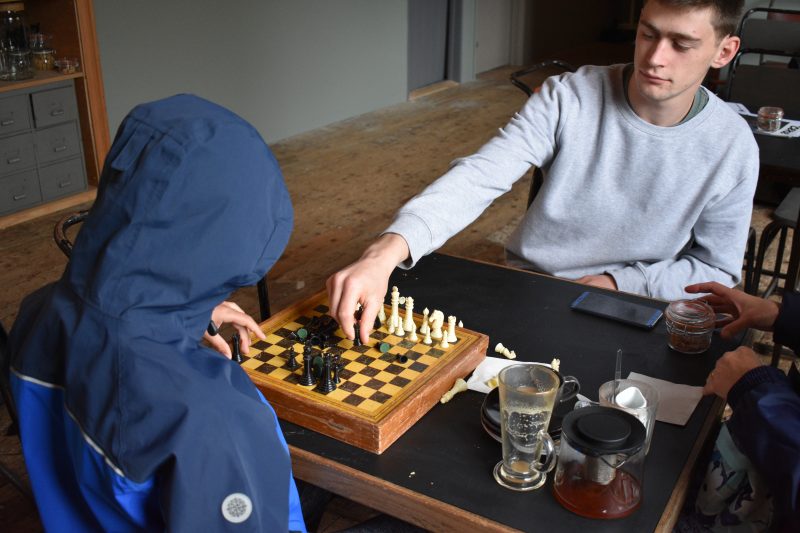 Mike and Romana run RouteStock, a Community Interest Company (CIC). This is how they describe the purpose of the company: ‘RouteStock explores routes to uncover the roots of our fellow human in the streets we inhabit. In our modern global village we know everything about the person on the other side of the world and very little about the person next door.

‘Our aim is to collect and share the lives of our local people using the medium of video, stills, sound, projection and live shows with the hope that we will get to know each other better and understand the diverse diaspora in our towns.’

This is an example of their work: to celebrate the centenary of votes for women, RouteStock is collaborating with the composer Laura Rossi, Chetham’s School of Music choir.  Faversham’s Henry Dagg will make a work celebrating Delia Derbyshire, a pioneer of the BBC’s Radiophonic Workshop, who created the theme music for Dr Who. RouteStock will produce live visuals, documenting the struggle and achievements of women over the past century. The first staging of the event will take place at Chetham’s Stoller Hall in Manchester but Mike and Romana are also planning to create the event in Faversham, bringing in a local choir and musicians. 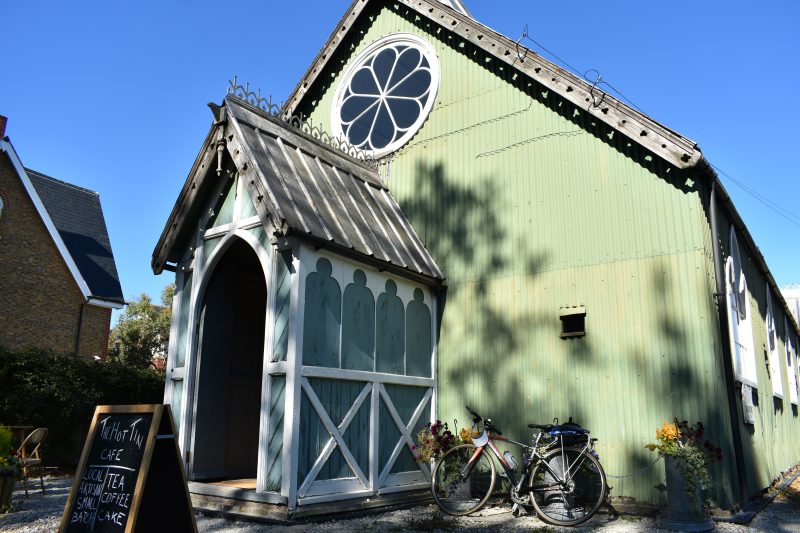 Routestock events often take place in unusual forgotten buildings – abandoned factories, derelict gilded theatres and neglected chapels. They are part of the Lost Lectures project, ‘a reimagining of the lecture format inventing interactive and immersive worlds for the audience’. The next Lost Lectures series is titled ‘The Electrograph’ and will take place in an old substation building. If you buy a ticket you will be emailed the address of the venue only three days before, although you already know that it is less that half an hour from Eros at Piccadilly Circus. I urge you to look at the RouteStock and Lost Lectures websites, as I am struggling to explain all this clearly. 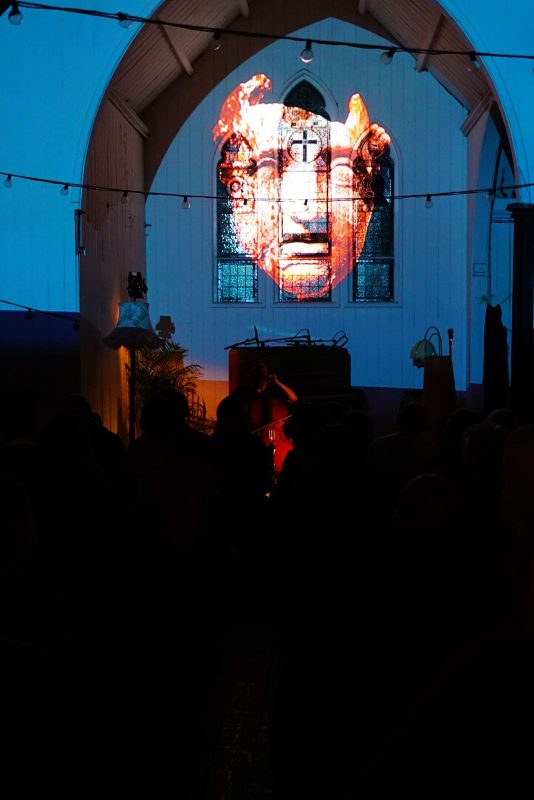 A performance at The Hot Tin, The Sea at the End of Her String

Last Sunday, Faversham Life attended a performance at The Hot Tin entitled The Sea at the End of Her String by Resina, Emilie Levienaise-Farrouch and Shida Shabibi of the FatCat record label, performers of post classical music. During the day, the Hot Tin’s stage is an endearing setup of standard lamp, potted palm and upright piano. It felt somewhere entirely different that evening. Resina’s cello playing was extraordinary – using improvisation, electronics and her own voice, she created musical loops, layering the sounds of her cello, played percussively, eliciting swooping sound effects and the powerful drawing out of reverberating, heart-shaking bowing. There was dramatic lighting and a reel of images – old botanical drawings, phrenology charts, galloping robotic horses and hovering bees – vanishing into the darkness above. 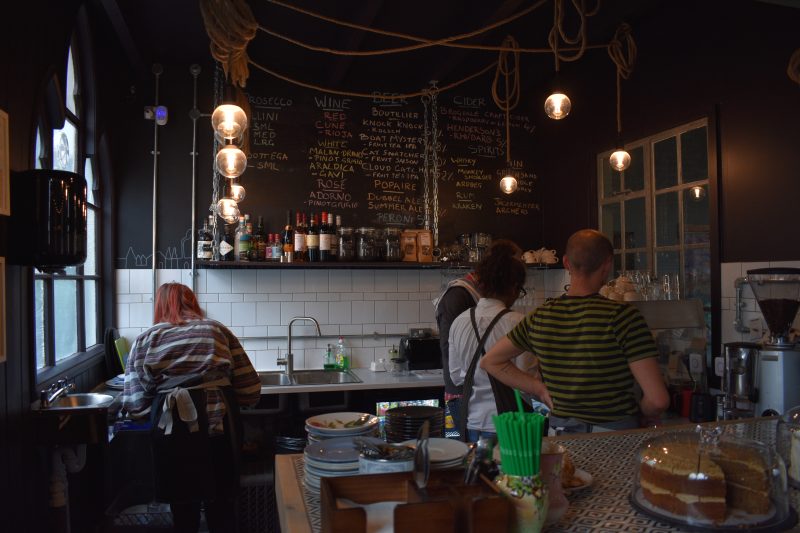 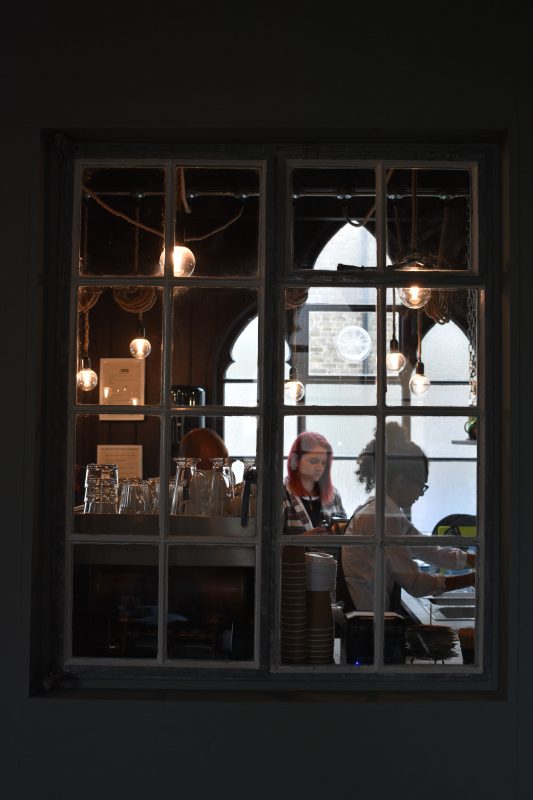 Faversham’s tin church with its versatile space and history (see our previous Faversham Life article for more on this) is the perfect home for Mike, Romana and RouteStock. Since opening a couple of months ago, it has hosted the launch of the Faversham Fringe, shown old film footage of hop picking during the Hop Festival, held linocutting workshops, and holds a regular Tuesday night yoga class. This is just the start – the future may see twirling acrobats in the church rafters, The Hot Tin becoming a venue for the London Jazz Festival, and a project to record the stories of local people. 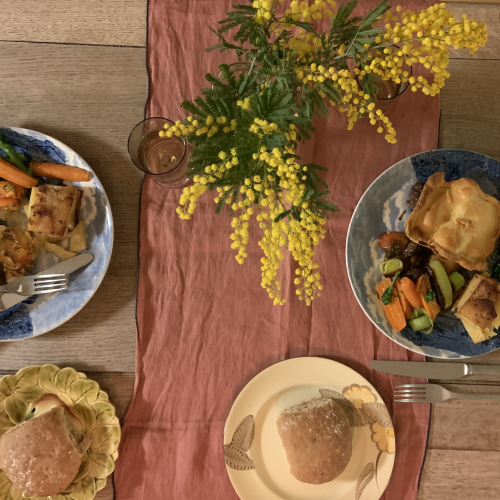 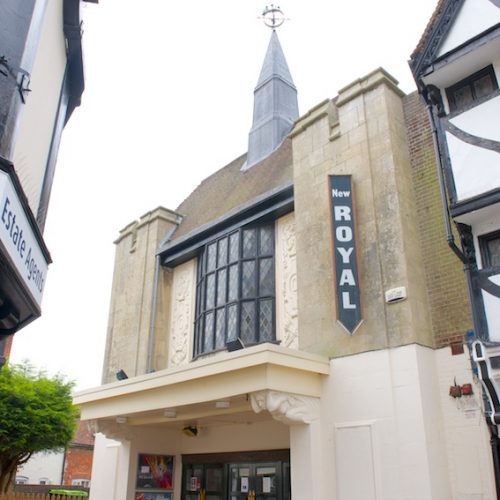